If you’ve ever wondered how a few million Jews manage to outsmart hundreds of millions of Muslims, here’s a partial explanation: 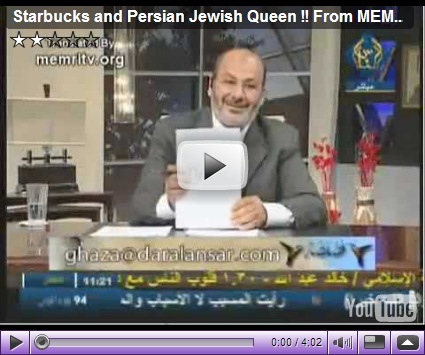 About time. I’ve always wondered why I needed to squeeze myself in my already-small seat because of a particularly fat person sitting next to me. Or why the airline would charge me for an extra 10KG in my baggage when the person who checked in before me was at least 50KG heavier than me.

To make this fair, there needs to be a mechanism that allows for people who are obese for reasons beyond their control (e.g. illness) to be exempt from paying the extra fare. But for the vast majority of those who are obese because of their own poor judgement and lack of self-control, I say: about time!

I know I must be the last person in the civilised world that has seen this, but I have Pesach as an excuse; I was cut off for a few days this week.

Once in a while, very very seldom, there is something on TV that is worth watching (the problem, is, of course, that you need to wade through gallons of dung before stumbling upon the occasional gem). I don’t have TV, but fortunately there is YouTube. A friend send me the link just after the holiday and I admit it stirred something in my old cynical soul.

She is 47 years old, she is not beautiful by conventional standards, and she sports a double chin and bushy eyebrows. But when she opens her mouth to sing, all these external features fade away to reveal the beauty inside. And then, when the singing ends, one is left to wonder about the stereotyped world we live in.

Following is a shocking testimony from an IDF soldier who participated in the fighting in Gaza a couple of months ago:

One day we were on a foot patrol next to this Palestinian village. We saw children playing in the streets next to some houses. There was nothing for us to do there, so we walked on. However, one of the soldiers, let’s call him Yuval, broke off from our group and disappeared. When he came back, a couple of minutes later, he looked somewhat excited and there were a few drops of blood on his shirt, but he refused to answer our questions about his strange disappearance.

Later that day, as we were turning in for the night, I overheard a conversation between two of my friends. They were discussing this strange incident and one of them said he saw what happened. Apparently Yuval walked up to two young Palestinian children in that village, drew out his knife and stabbed one of them repeatedly until the kid fell to his knees. The other kid started running away, but Yuval easily caught up with him and stabbed him too. He then threw his knife into some bushes and ran back to our group.

I was too stunned to ask my friends any questions. Apparently it all happened very fast so only a couple of the soldiers even noticed Yuval went missing.

After the war I heard that the Palestinians were complaining that an IDF soldier murdered a 16 year old boy and wounded his 7 year old friend. I realised they were referring to what Yuval did.

I cannot imagine how a human being can walk up to two innocent children and stab them like that. It’s horrible.