During the unending saga of Arafat's death, many of his supporters gathered outside Percy hospital in Paris to hold a vigil. They lit candles, read from the Koran and otherwise expressed their sympathy with whom they view as a leader. 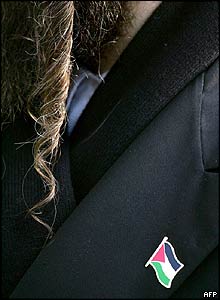 And among the predominantly muslim crowd, the anti-Israel posters and the Palestinian flags, an unusual apparition: ultra-orthodox Jews clad in traditional chassidic garb, sticking out like sore thumbs.

These unholy supporters of Arafat are representatives of a small, fanatical sect called Neturei Karta (aramaic for "keepers of the city"), anti-zionist charedim who steadfastly oppose the State of Israel's right to exist and make it a point not to miss an opportunity to bash Israel. One of them is even on the payroll of the Palestinian Authority, acting as "Minister for Jewish Affairs" in the Palestinian cabinet.

A quick-eyed photographer managed to capture this anomaly: peot and a flag.