Fontanelle is the term used for the soft spots between the unfused sections of the baby's skull, which enable the skull to compress slightly during its passage through the birth canal. The fontanelles usually close when the baby is about one year old.

Fontanelle is the nickname of the storyteller in Meir Shalev's book, a nickname given to him by an older woman who rescued him from a fire when he was five and named him for his "soft spot" (she is his only real love and the whole novel revolves around his yearnings for her). His real name is Michael Joffe, fifty-five years of age, father of twins, who tells us the story of the Joffe family, him being the only "normal" person in the family. Well, if you count someone who can hear and feel things through his fontanelle as being "normal". 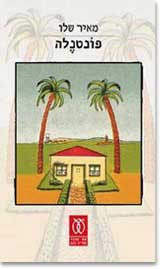 Shalev masterfully weaves the story of four generations of the Joffes, from the grandparents who built their home in Emek Izrael (in northern Israel), through their four daughters, ending in Michael Joffe ("Fontanelle") and his family. As in his other novels, Shalev pays careful attention to details and repeats them throughout the book, as a result of which the characters gradually become more real, people we can connect to and understand.

When I read Shalev's novels I am always reminded of Gabriel Garcia Marquez, the Nobel price novelist from Colombia. Shalev's storytelling is borderline fantasy, combining surrealistic characters and happenings with minute care that somehow makes it all sound real in the context of the story. And yet, when one pauses to reflect on the book, one has an uneasy sense of "this is too big to be real". To try and explain this, here is a partial list of the charcters in this book:

The Joffes also have their own family sayings and customs, a "language" which has descended through the generations and which distinguishes them from the rest of the world. One of these is the particular usage of the term "to compensate for". An example: he might be stupid, but to compensate for that he is also an idiot.

Shalev was voted last year as Israel's "most loved" novelist in an online poll. His first novel, A Russian Novel, was published in 1988 and was a huge bestseller. Fontanelle is his fifth novel. I admit that I did not take immediately to this book; it was a slow start. But after a while, once the characters established themselves and started to take shape in my mind, I found that I was enjoying the reading. Perhaps not as much as Shalev's previous novels, but it did make me laugh out loud several times and that is surely a positive sign for a good book.