The Amnesiac, by Sam Taylor

The Amnesiac is a strange book. I bought it following a recommendation on VSL, that called the book "unputdownable". Well, it took me a few days to get through it, so I wouldn't define it quite as such. But it is an intriguing book, as one would expect from a book about amnesia.

James Purdew is a 30-year-old Briton that leads a more or less contented, easy-going life in Amsterdam with his girlfriend, Ingrid. A leg injury has him confined to the apartment for a while, which gets him thinking about life in general and his in particular (lesson for life: do not think too much!) He gradually realises he has this blank about three years in his past, and when he checks his diaries he finds out those relating to that period are locked in a box to which he has conveniently lost the key. As his relationship with Ingrid hits a dead-end anyway, he decides to head back to England to retrace his past. 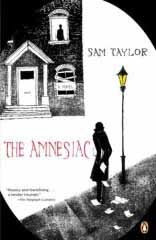 So far so good, and up until this part the book was indeed "unputdownable". A great start. But this is where things get more complicated. James starts his detective work by going back to the house he lived in during his university days. The plot goes back and forth in time and various clues come together, pieces of the past. James starts feeling this is all part of a bigger picture that keeps eluding him. He also gets the feeling he is being manipulated by greater forces.

The story is hard to follow, not only because of the obvious "holes" of James' missing past, but also because of the writing style. Narration switches between James and a mysterious narrator, that claims at times to be in the same room as James. Excerpts of other works are inserted alongside the main story. There are several characters, in different times, whose names or initials are similar. Taylor also switches between genres: science fiction, mystery and drama. This is partly why this book is slow to read; the reader is curious to find out what is going on, but the style is such that it slows down the reading pace.

The end is rather disappointing, as one suspects what happened quite early on in the story. Nevertheless, this is a book I would recommend and certainly a great debut book for Sam Taylor.

PS - I was reminded of the movie Memento while reading this book (note to self: must watch that movie again).