The Day Lasts More Than a Hundred Years, by Chingiz Aitmatov

Aitmatov is a Kyrgyz writer who passed away this year. I have never heard of him or his books, but a friend recommended this book to me recently. As is usually the case with friends' recommendations, this book turned out to be a real gem.

The story takes place over the course of one day, and includes one major plot and one short sub-plot. Yedigei, a railroad worker in remote Kazakhstan, sets out to bury his old friend, Kazangap, in an old cemetery. Throughout the long journey to the cemetery, Yedigei recounts his personal history and that of the few other souls that live with him at the remote railroad station. The shorter sub-plot involves the discovery of extraterrestrial life by an American astronaut and a Soviet cosmonaut. The location of the Soviet launch site near Yedigei's station serves as the background for this science-fiction background story. 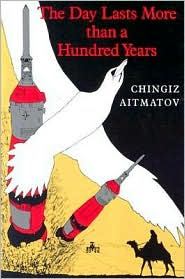 I will not go into the plot itself; it is far too elaborate and clever for me to try to summarise it in a few short paragraphs. Aitmatov paints an achingly beautiful picture of hardships of life in the remote steppes of central Asia under Soviet rule. He succeeds in describing the rich tradition and history of the local people and how their culture and practices are challenged by the laws of the Communist regime. The animal world plays a major role in the story, with Yedigei's camel, Karanar, being one of the main characters in the book. There is an ever-present criticism of the Soviet regime, but it is so subtle that the book does not become an anti-government manifest.

The sub-plot about the extraterrestrials seems, at first, to be entirely disconnected from the main story. However, as details about the discovery become more apparent, and especially the reaction of the leaders of the USA and the USSR to the discovery, it all comes together. Yedigei's earthly worries and dealings are interwoven with galactic events, to make a strong statement about the human condition. The past, present and future are interwoven in an intricately designed masterpiece.

It's hard to do justice to this book by attempting to review it. I learnt a lot about Kazakh culture and the hard-working rural inhabitants of the Sarozek desert. But mostly I learnt that one can tackle the big questions in life through a simple story. In two words, my recommendation is: read it.