Does the Obama administration understand the complexities of the Middle East?

This question rises again to the fore following the current “unprecedented crisis” between the US and Israel, after the allegedly unintentional gaffe made by Israel during Joe Biden’s visit. (If you’ve been sleeping this past week: the municipality of Jerusalem approved a permit for building new apartments in East Jerusalem, without the government’s knowledge and without paying attention to the presence of a US eminence in the country).

Apparently, Hillary Clinton held PM Netanyahu on the phone for 43 minutes, berating him for allowing this to happen on his watch. 43 minutes! I’m not sure even Bill received such a long earful from Hillary after the Monica Lewinsky affair. Can the US administration be serious about this? Do they really think that the entire peace process is dependent on a permit for some apartments in Jerusalem? Is this really the most pressing issue, one worth 43 minutes of Hillary’s valuable time.

It is fast becoming apparent that Obama has no clue when it comes to the Middle East. His infamous appeasement speech to the Arab world in Cairo was a bad omen. Now it seems that he is indeed clueless, believing that articulate speeches can solve centuries-old problems as if by magic. Instead of dealing with the real issues at hand (Iran, anyone?), he is busy peddling useless “proximity talks” between Israel and a powerless Palestinian leadership. And he allows his Secretary of State to whine about some apartments in East Jerusalem that are years away from being built (as if anyone in his right mind truly believes that area of Jerusalem is ever going to be part of a Palestinian state). How so very frustrating, even if not entirely surprising. 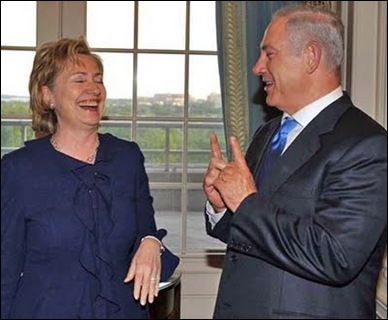 Bibi explains something to Hillary

As a small consolation, here is the transcript of the Hillary-Bibi 43 minute conversation (courtesy of The North Star National). Look up the Yiddish if you’re not familiar with it:

CLINTON:  “Bibi, this is Hillary.”

NETANYAHU:  “Hillary, Bubbala!  How are you?”

CLINTON:  “Don’t you ‘Bubbala’ me, Bibi.  What’s going on with this announcement of 1600 new apartments while Joe’s in your country?  That’s just a little in-your-face even for you.”

NETANYAHU:  “Oh, that.  That was a little unintentional, technical mistake.  A misunderstanding.  Come now.  You must know I don’t get every little building permit reported to me.  It’s low-level bureaucratic stuff.”

CLINTON:  “An unintentional mistake.  A misunderstanding.  Right.  That announcement was a deliberate insult.  A humiliation for the Vice President and an affront to the President and to the people of the United States.”

NETANYAHU:  “Hillary, please!  Look, you have to know this was done in all innocence.  It was regrettable, and we recognize it was hurtful.  After all these years, you more than anyone would recognize that our connection with the American people and our respect for the president are important components of Israel’s security and foreign relations.”

CLINTON:  “Don’t try to butter me up with diplomat talk.  This was a calculated effort to undermine the peace talks with the Palestinians we’re trying to advance.  You’ve weakened trust with us, and you and your government are in serious trouble.”

NETANYAHU:  “Hillary, you have to believe I had nothing to do with it.  Look, you know we have this Foreign Minister, Avigdor Lieberman, who’s new to these things.  He’s going to get a bissel fardrayt from time to time and make these little goofs.”

CLINTON:  “‘Little goofs?’  You’re striking right at the heart of the Obama Administration’s Middle East policy and plan for peace.”

NETANYAHU:  “Policy and plan for peace?  Whatever could you be referring to?”

CLINTON:  “You know full well.  The President has made it publicly clear that the United States does not accept the legitimacy of continued Israeli settlements, and that they have to stop.”

NETANYAHU:  “Oh, yes, of course.  Now I remember.  That little diplomacy shtick Mr. Nobel Peace Prize has going.  How could we have forgotten that even-handed Cairo speech, and this well-thought-out, impartial, equitable plan our neutral broker Barack Hussein has come up with?  Let’s see … we sink our government and tacitly abandon our rights to territory by agreeing to freeze settlements in exchange for … what?”

CLINTON:  “Don’t get cute with me, Bibi.  A freeze would be a show of faith in the process.”

NETANYAHU:  “Oh, faith in the process.  The process!  How silly of me!  So much the process has brought us.  Intifadas with suicide bombers blowing themselves up in our buses, markets and restaurants.  Missiles raining down on children and bubbas from Gaza, from which we of our own accord withdrew.  United Nations investigations and resolutions against us for defending ourselves.  Here we have a United States president buttering up the Palestinians and turning against his friends, and we wouldn’t want to threaten the process with a few apartments in an area of our ancient capital not even claimed by the other side.  You’re so right.  I must apologize for damaging the process.”

CLINTON:  “Bibi, you’re trying my patience.  We’re expecting you and your government to take bold, specific actions to show your commitment to the relationship with the United States and to the peace talks.”

NETANYAHU:  “Hillary, I assure you we are willing to show the same commitment to the President’s peace talks that he has offered to the vital interests of the state of Israel.”

CLINTON:  “And what would that be?”

NETANYAHU:  “It’s another technical, diplomatic term:  does the word bupkes mean anything to you?”

Anonymous said...
This comment has been removed by a blog administrator.
8:55 AM