Pope John Paul II died this weekend, at the age of 84. I will carry two memories of him with me.

The first is of his election in 1978. I was a young boy growing up in Rome at the time and I remember both the relief and the surprise surrounding the news of his election. Relief, because it concluded the prolonged wait for the decision, coming so soon after the premature death of his predecessor. Surprise, as he was the first non-Italian pope to be elected in more than 400 years. I remember the day vividly; suddenly all the church bells started ringing out to announce that white smoke was coming out of St. Peter's basilica.

More importantly, I will always remember him as the pope who went a long way to mend the relationship between Christianity and the Jews, in words and in deeds. He was the first pope to visit a synagogue and the first pope to visit Israel. During his visit to Yad VaShem, the Holocaust memorial museum in Jerusalem, he said: "the fact that anti-Semitism has found a place in Christian thought and teaching requires an act of teshuva (repentance)". I can only hope his successor continues his ways.

May he rest in peace. 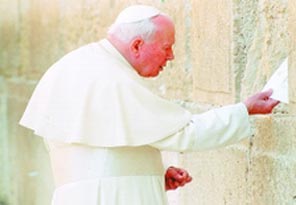