I took a peek into North Korea today. It was a short peek, it was foggy so I couldn't see much, but it was a peek nonetheless.

With the end of the Korean War in 1953 and the signing of the armistice agreement between South and North Korea, the DMZ (de-militarised zone) was set up. Where the front line stood at the end of the hostilities, a military demarcation line was drawn, from one end of the Korean peninsula to the other. The area 2km north and south of this line became the DMZ. Today I took the half-day "DMZ Tour" from Seoul to try and catch a glimpse of The Democratic People's Republic of Korea.

The drive from Seoul to the border is astonishingly short. On a traffic-free Sunday morning it took us well under an hour, driving north on the "Freedom Highway". After some formalities like having our passports checked (officially the DMZ belongs to neither country) and switching to a tightly-controlled official tour bus, we arrived to the southern border of the DMZ. There, the South Koreans constructed a small museum that describes the history of the place and everyone is made to watch a 7-minute movie that shows how the DMZ today, despite the de-facto state of war between the two parts of the divided country, is nothing more than a big nature reserve (with about 1 million soldiers around it, mind you). 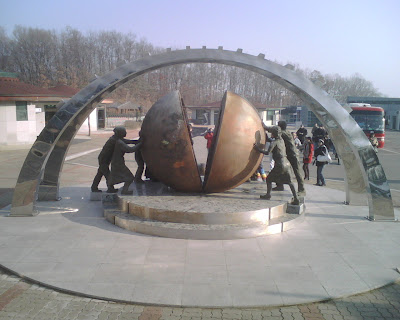 By far the most fascinating part of this generally drab tour is the visit to one of the tunnels dug by the North, with the purpose to invade the South one day. The South Koreans, initially by accident and later with the aid of the Americans, began unearthing these tunnels in the 1970s. Four have been found so far, but the general belief is there are many more. The one open to the public is the 3rd tunnel, discovered in 1978. It is located 73m below ground level and runs through the entire DMZ. A tourist train goes down the interception tunnel dug by the South Koreans, and then one can walk about 200m north into the DMZ, below ground. It's a back-breaking experience, as the height of the tunnel is just short of a normal (Western) person's height. No picture-taking is allowed.

This 3rd tunnel was discovered after a defector from North Korea tipped off the authorities. The South Korean military engineers bore holes into the ground in several places and filled them with water in PVC pipes. Eventually, they hit the tunnel. Notwithstanding the evidence - the direction of the dynamite drill marks, the slope of the tunnel - the North Koreans vehemently denied they were responsible for digging it. In fact, they tried to hide the fact this was an incursion tunnel and claimed it was a mine; they proceeded, in their retreat, to paint parts of the tunnel black using charcoal in order to "prove" this was true. Silly buggers. 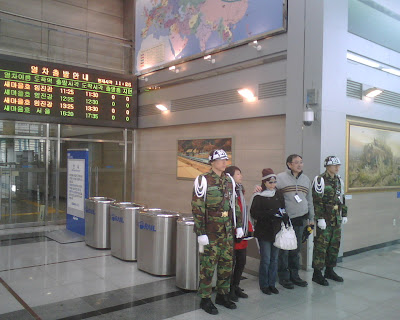 Another part of the tour is Dorasan train station, the northermost railroad station in South Korea. It was reconstructed after the rapprochement of 2000, and stands there today, brand-new, state-of-the-art, shiny... but totally empty, except for a souvenir shop and a couple of fancy-looking soldiers. The signs say Seoul-Pyongyang, waiting for the day this train route will become a reality. A nifty gimmick: you can stamp your passport with an immigration stamp to show you've "taken" this ride between the two capital cities. President Bush visited here a few years ago, and left a hand-written message: 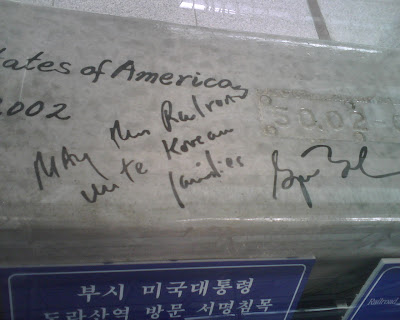 Aside from the fact it was foggy and a freezing cold day, this man-made piece of history was a welcome distraction in an otherwise boring weekend in Seoul.

I'm really interested in DMZ (Demilitarized zone) tours. Thank you for very useful information. Is there any package deal for DMZ tour?