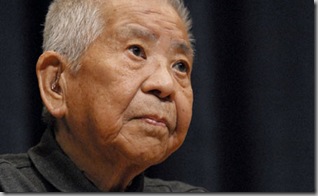 The Guardian bring the story  of Tsutomo Yamaguchi, the only known survivor of both atomic bombs dropped on Japan at the end of the WW2. He was on a business trip in Hiroshima on August 6, 1945 and suffered serious burns. He returned to his hometown of Nagasaki the following day, in time to catch the second bomb on August 9.