We got up late today. The kids went to bed very late, not surprising given the 4-hour difference from Tokyo. So it wasn’t until around 12:30pm that we left the hotel. First, we popped into the JCC to take a look at the kosher shop. It looks like a small mini-market and has a good variety of products, including frozen foods, meats, Israeli products and even some local dairy kosher cheese. I really wish we had something close to this in Tokyo…

Weather was not looking good this morning. It was cold and it looked like it was going to rain any moment. Hoping to catch the Maori dance performance at Auckland Museum, we took a taxi (driver from Samoa) directly to the museum. But when we got there at 1:35pm we were told the performance began five minutes ago and latecomers were not allowed in. Disappointed, we got on the Auckland Explorer Bus (one of those double-decker buses that hops between sightseeing spots) and got off at the quay to catch a ferry to the North Shore.

Auckland is home to around 1.2 million people, so it’s not a very big city. However, it is spread across a huge geographical area with most people living in some distant suburb. The North Shore is one of these suburbs but what is unique about is that it has retained the old English look. The town of Devenport is known for its old buildings and quaint shopping streets. Mind you, when I write “old” I mean 100-150 years; that’s about as much history as New Zealand has. 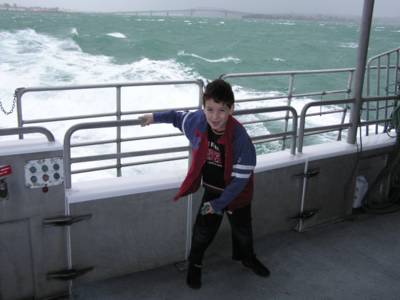 By this time, it was raining and there were strong gusts of wind blowing. When we got off the ferry (a short 10-minute ride across the harbour) we realized that it was impossible to walk around the town without getting drenched within a couple of minutes. We almost headed back to the ferry to go back to the city, when I noticed that the sky above Auckland looked brighter. And indeed, not 5 minutes went by and the sun was shining again! A fine example of what our Lonely Planet guide called “maritime weather” that can change almost in an instant.

So we set out to explore Devenport on foot. We went past Elizabethan houses and old churches to start climbing to the summit of Mount Victoria. At the top of this mountain one can see breathtaking views of Auckland and the harbour. Except it was so windy up there that after a few hasty pictures we scrambled back down for some relief from the winds.

This is a view from the top of Mount Victoria: 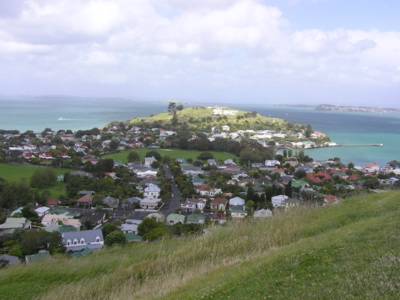 After getting back to Auckland, we decided I’d go with A. to Kelly Tarltons – an ocean and underwater museum. The line to get in was unbelievably long, but then it turned out that the doors were shut and once they opened everybody just poured into the building. On the way in I noticed the opening hours were only until 6pm and it was already past 6pm. Then I noticed everybody in line was holding an identical piece of paper and that the cashier was closed. Strange… Once we got to the entrance I told the staff that I thought the place was still open, so they smiled and just waved me through without paying anything. I guess I’ll never know exactly why.

Inside there were many fish, from common snappers to more exotic stingrays. You can walk through a domed passageway with the fish swimming all around you. A. particularly liked the stingrays and the sharks, but he was also excited about the crayfish. He kept running from window to window calling out the names of the fish on the plaques.

When we exited the place we waited in the bus stop for a bus to downtown, as there were no taxis around. One bus came by after 15 minutes but didn’t even slow down. I realized that perhaps one should wave down the bus here, as in England. The next bus came after 10 minutes and the friendly driver (from Turkey) took us back to the city. We met up with T. and H. at the Sky Tower and took the lift up to the observation deck, about 250m up in the air. The weather wasn’t all that great, but visibility was still quite good. They have these glass-panelled floors where one can walk and look down all the way to the streets below. Rather unnerving.

By the time we got back down to earth, it was well past 8pm and I realized I was feeling rather hungry and tired. I had fasted all day – it was the 10th of Tevet – so we headed back to the hotel for a quick dinner and an early night. Tomorrow morning we head to the South Island, to Queenstown.