So we set off to New Zealand yesterday. Sounds dramatic, but all we did was get on a plane from Tokyo to Hong Kong, waited a few hours, then got on another plane from Hong Kong to Auckland. Total of about 16 hours flying time (net) and we're in Kiwi-land! People in our day and age never cease to complain and moan about these long flights but personally I like to take a more historical (and stoic!) perspective. Our grandparents could only have dreamt about getting to a place as far away as New Zealand and also for our parents it was never an easy decision to make. For us, despite this now being a Concorde-less world, it is as easy as 1-2-3: buy the ticket, book a hotel and a car (all done online) and get to see the famous NZ sheep up close.

I am reminded of Mark Knopfler's song Sailing to Philadelphia, about Mason and Dixon making their way across the Atlantic to chart the famous line that was to become the symbolic border between the slave states and the free states in the US. It is clear from the song’s lyrics that for them, the journey from England to Philadelphia was a long and arduous one, nothing we can imagine going through today (except, perhaps, on a pleasure cruise). But, I digress.

We took off from Narita airport on Monday at 11am, with Cathay Pacific. A most recommended airline, by the way, except for the food we got which was not the airline's fault as we ordered a kosher meal (it was that horrendous conserved food with a 2006 expiration date on it, which says it all).

Got safely and uneventfully to Hong Kong around 3pm. As our ongoing flight to Auckland was departing at 9pm, we decided to go into town for a few hours. We took the Airport Express train which takes you to Central Hong Kong in 20 minutes and strolled around Central for a couple of hours. I've been to Hong Kong several times before, but for the family it was a first. The most striking thing for them was the noise; coming from Tokyo one is used to the crowds, but not to the level of noise downtown Hong Kong generates. Mercifully, it wasn't horridly humid and hot; after all, this is December.

Back at the airport we took a quick shower in the beautiful Cathay Pacific lounge, before boarding our flight. The flight to Auckland was packed full, but we had 4 reserved seats together which was convenient. The kids fell asleep relatively quickly so we could get a wink ourselves. I watched one movie before falling asleep, Collateral, which was rather disappointing. I found it to be very slow in picking up a pace and only the last 20-or-so saved it from being a total disappointment. Not one of Tom Cruise's best performances, I’m afraid.

We landed in Auckland a bit before 1pm on Tuesday and took a taxi from the airport to our hotel, the Duxon hotel in the centre of the city. After checking in, we tried to get some sleep to recover from the flight, but the kids, who were well-refreshed from their sleep on the plane, did not allow us this exaggerated pleasure.

The view from our hotel room includes the Sky City tower, which is the tallest standing structure in the southern hemisphere: 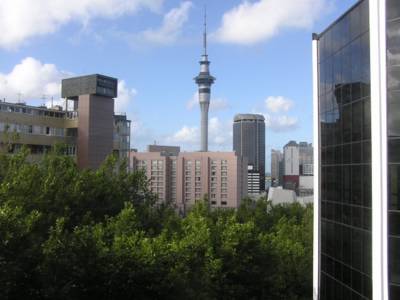 Around 6pm we gave it up and set out for walk around the city centre. We knew that the Jewish Community Centre of Auckland was on the same street as our hotel, but as it turned out it was right next door to the hotel! It was closed at this hour, but it looks rather big as the complex contains also the local Jewish school, as well as a kosher shop.

That's the hotel on the left, and the JCC on the right:: 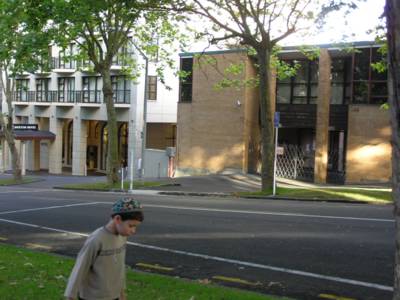 We then walked down Queen's Road, which is the main street in central Auckland. The city centre looks pretty much like the city centres of Sydney and Melbourne: office buildings, shop signs aligned horizontally above the pavement, Starbucks Coffee shops and many young people all speaking English in an amazing variety of accents and intonations. As in Australia, most of them are Asians. By this hour most of the shops were closed so we walked all the way down to the harbour and had a look, but it was too cold (some summer!) to take a stroll down the quay.

Before heading back to the hotel we popped into a Star market to get some food. While shopping, this guy came up to us and asked us if we were from Israel; I guess he saw the kippah or heard us talking. He said he was Jewish and offered some information about the local community and synagogues ("temples", as he referred to them). He also apologized for the cold weather, something for which the taxi driver that drove us back to the hotel also apologized for; everyone seems to be really friendly to tourists here. Incidentally, just like Australia (and many other countries, I guess), the taxi drivers we had met thus far were all non-native; one from Samoa and one from Russia.

This concludes our 2nd day of the trip, and our first half-day in New Zealand. The kids are in bed (still awake) and I'm going to slip down to the internet room in the lobby to post this. A demain!