Japan leads the technology gadget world. Japanese hardware manufacturers release their latest products in the domestic market first, and some advanced models are available only domestically. Whilst living in Tokyo, I was accessing the internet using iMode on my DoCoMo phone years before the introduction of 3G phones in the West. I always took it for granted that use of technology in Japan, especially in the domain of mobile/wireless communications, would be ahead and more advanced than anywhere else. 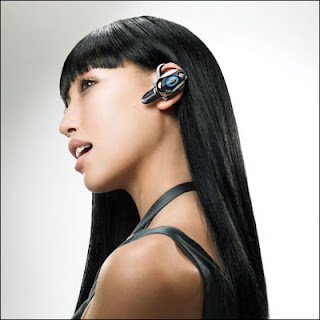 So I was unprepared for the strange experience I had walking the streets of Tokyo this week: I was the only one using a Bluetooth headset for my mobile phone (the H700 pictured on the left). It took me a while to notice it, but nobody except me had a Bluetooth headset. I noticed that on my first or second day here, and all week I looked around for somebody else using one. Nothing. Not even one person.

This being Japan, the reason for this strange "Bluetoothless" phenomenon is obviously not slow or late technology adoption. I believe the answer to this puzzle lies in the social and behavioural rules of mobile phone etiquette here.

A strong emphasis is placed on proper manners - manna-a to locals - when using a mobile phone. For example, it is very rare to see a Japanese person use a mobile phone to speak on the train (texting though is OK; it is actually the most common activity next to reading manga). In the rare occasions this happens, the entire body language is one of apology and self-minimisation: a hand cupped over the phone, the head bowed, and a look of real consternation on the face of the caller, who usually ends the call immediately explaining he/she is on the train. When in meetings or in public places, if the phone rings, more often that not the person taking the call will step out of the room. The all-too-familiar picture of two Israelis sitting at a restaurant or coffee shop, both talking loudly into their phones, is nonexistent in Japan.

So I think that Bluetooth use goes against this social etiquette. Speaking with a Bluetooth headset means the person is basically talking into thin air, seemingly to nobody (a familiar picture in airports). This is unacceptable behaviour here, as it is not obvious to others around you that you are on the phone. It is too embrassing and definitely too impolite to be talking this way. It's almost like being caught eating in public, God forbid!

TV Shows and a Fat Pig

In London again last week. Got in Monday with the most dreary weather imaginable; we didn't see the ground until we were practically on the runway. Most unpleasant.

Zapping through the TV channels here (jet lag or just from boredom) I am always suprised by the fact that almost every day one can watch a game show centered around general knowledge questions. And not only during the day but also during evening prime time. How come the UK has so many of these shows? I am not certain (as I am not connected to TV at home), but I'm pretty sure there are no such shows in Israel. I don't hear about them on the news. All I read about are reality shows and song/dance contest shows. The last one I remember being on TV was "Who wants to be a millionaire", but I don't think it's been on for a while now.

What does that say about Israelis? Is the generations-long Jewish quest for knowledge, a result of the priority placed by parents on education, coming to an end in the Holy Land of all places? I don't know, but I would definitely prefer to hear that TV audiences in Israel are watching "The Weakest Link" rather than vegetating in front of "Big Brother".

I also managed to catch a play this time: "Fat Pig" at the Comedy Theatre. It's a small story about a guy (Nick Burns) who starts to go out with a fat girl (Katie Kerr) but doesn't manage to come to terms with his friends' criticism of his new love. Kerr and Burns do a great job, but the ex-girlfriend (played by Kelly Brook) is seriously annoying and seemed to "over play" her part. Cute play, but nothing much to write home about. It's worth watching for Kevin Bishop, who does a great job as the rude and "in your face" friend.

Well, Obama it is. Hard to say what this means for the US and for the world. As The Guardian put it this morning: "it is hard to know whether to week or to shout for joy". Most of the local commentary, driven by US-born Israelis, is that this is a historic mistake, the magnitude of which will be clear soon enough. Others are more cautious and ask to give Obama a chance.

If I were to try and take a high-level view of recent events (a risk, given the lack of proper historical perspective), I would frame everything in the context of the power shift from the US to the East, particulary to China. The US is steadily losing its hegemony as the world leader, a position it has held for almost a century, most recently as the sole world leader. The US is not going away any time soon; empires usually do not crash in a single bang, they fade out over a long period of time. But the trend is clear. This fading out has always carried with it tumultous events in world history, as the world seeks a new balance. The war against terrorism, the economic turmoil, the general sense of hopeleseness, the apathy of Europeans - everything can be attributed to this shift. The thirst for change in America, manifested in this Presidential election is yet another symptom of this global readjustment. The US is struggling to come to terms with the fact that it has peaked and it's mostly downhill from here.

We live in a world best described by the old Chinese curse as "interesting times".

So the race is finally over, and tomorrow is the big day. Obama or McCain?

Truth is, I haven't been following the US Presidential election much (the disillusionment with Israeli politics is clearly spilling over) so I can't say I have a firm opinion either way. My guts tell me McCain will be better for Israel, but frankly I'm not too sure my guts are right this time. Who knows? 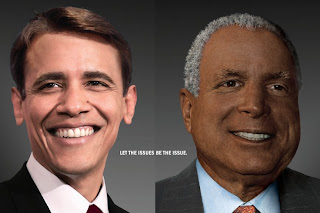