A picture published in Haaretz yesterday: 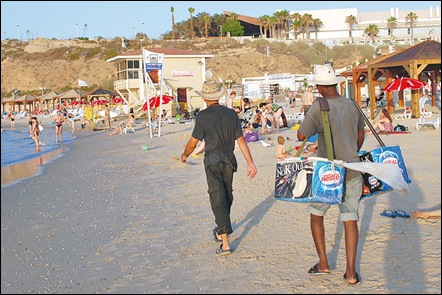 The picture shows that ubiquitous feature of public beaches in Israel: the guy who sells ice cream from a box. When we were young, the seller would carry the box himself, announcing his wares with that monotonous cry every Israel can mimick: “artik, artik”. No longer. Nowadays he can afford to hire a foreign worker (I’m guessing by the colour of the skin) to do the carrying for him, while he takes care of the business transactions (note the money belt).

On a side note: the difference in status is evidenced also by the footwear. While the boss is donning a pair or Crocs (retail price: 200 shekels), the employee is wearing cheap plastic sandals, probably bought for a few shekels at the old bus station in Tel Aviv.

Well, I was wrong.

Four summers ago, when the Japanese Government launched the “Cool Biz” campaign, I thought it wouldn’t catch on. But this week in Japan I held all my meetings with no jacket or tie, and most people in the room with me were dressed similarly. In fact, in one of the meetings I saw the following note posted next to the lift: 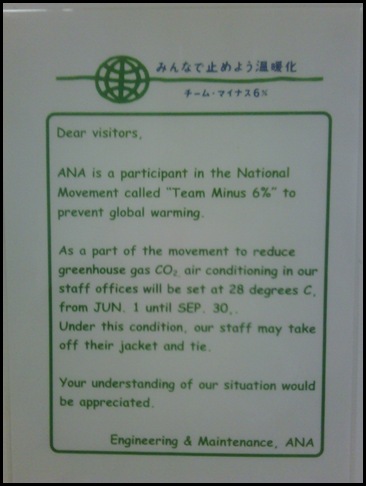 And the same was true in Korea last week: no suit/tie from June to September.

I must be getting old.

I woke up here in Japan on Friday morning to see the news breaking about Michael Jackson’s death. After some meetings I came back to the hotel with a couple of hours to spare before Shabbat. So I decided to go downstairs to the gym. I turned on the TV in front of the treadmill and tuned in to BBC News.

For the entire 40 minutes or so that I was on the treadmill, the only thing on BBC News was Michael Jackson. That included two or three “world news” updates, which updated only on Michael Jackson. And ever since – it’s been 3 days now – I still see Michael Jackson pretty much everywhere I turn: newspapers, internet or TV.

OK, I know he was popular. I think I even bought “Thriller” when I was in high school (or at least listened to it quite a lot). But is his passing away really so important as to overshadow practically everything else that is going on in the world? He was only a singer, for Pete’s sake! And one that was seriously disturbed and socially inept. He was pretty successful in mutilating his own body though… But a cultural icon? Give me a break.

So to many he might be the “eternal child”. But this old man really has had enough. May he rest in peace (and leave us in peace).

(PS – I was much more saddened to hear about the passing away of Jo Amar, whose songs I grew up with and who was a personal friend of my father’s).

Aunt Bunny is Coming to Get Me

Ages ago, I used to listen to Eddie Murphy’s comedy sketches (on tape, this is before CDs). The funniest one was the one describing a typical Sunday BBQ gathering of his family, during which his drunk father would lash out at each of the family members in a vivid, explicit and hilarious fashion, proclaiming: “This is my house! And if you don’t like it, you can kiss my ass!” (The jokes were not politically-correct, to say the least, but hey, this was the early 80s.)

Anyway, one of the unforgettable characters in that sketch was Aunt Bunny, who used to scare little Eddie because she had a moustache bigger than his father’s. He would have nightmares and wake up screaming: “Aunt Bunny is coming to get me!”

This morning I was reading the newspaper on my flight out of Tel Aviv and the economic section was plastered with Shari Arison’s press conference yesterday to launch her new book. Now, that’s some disturbed woman.

For some reason, reading about Arison reminded me of Aunt Bunny. I can definitely see myself waking up at night screaming: “Shari Erison is coming to get me!”.

If the matter were not so serious, one could have had a good laugh about the coverage in Western media of the post-election unrest in Iran.

Newspaper headlines about a coup d’etat, Amanpour’s appropriately frowning reports “from the street”, Sarkozy’s populist slogans – all show a deep misunderstanding of Iran and the forces that drive its theocratic regime. The image of Moussavi as a gentle reformer that represents an antithesis of the rabid Ahmadinejad, is beyond laughable. Not only is Moussavi a fanatic in his own right; the President, no matter the size or colour of his beard, is nothing but a glorified puppet. The Council of Guardians (whose members include the likes of Jannati and Larijani, who don’t believe in elected government), and of course the Supreme Leader himself, are the ones that call the shots.

This mistaken and gullible attitude towards Iran betrays an ignorance that permeates not only public opinion but, more worryingly, also official policy. It numbs the senses of Western leaders and deviates attention away from a serious debate about how the world should be tackling this dangerous and rogue regime. 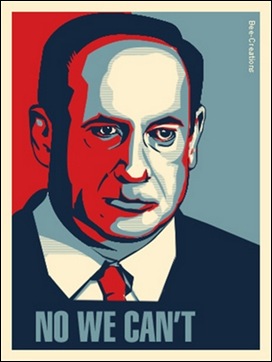 The Uncommon Reader, by Alan Bennett

I bought a few books in London this week and while packing for the flight back home I put The Uncommon Reader in my bag simply because it is a slim book. I was holding the book while walking down the aisle to my seat, and this man smiled widely at me from his seat, pointed to the book, and said (in Hebrew): “This is the funniest book in the world”. I told him I haven’t started reading it yet, and he said: “lucky you!”. So when I sat down in my spacious EL AL economy-class seat and opened the book, expectations were high. 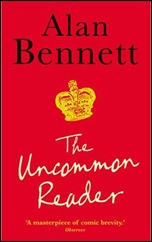 Alan Bennett is the author of known West End plays, most recently “The History Boys”. In this book he weaves an exquisitely lovely and quintessentially British story about Queen Elizabeth II becoming an avid reader in her old age. Chasing her dogs on a walk through the palace grounds, she stumbles upon a travelling library van, where she meets Norman, who works in the royal kitchens. The young boy introduces Her Majesty to the world of books and becomes her confidante in the matter of reading, after the Queen promotes him from the kitchen to become her personal assistant. She struggles through the first book – which she borrowed from the library van only out of her “sense of duty” – but quickly enough she starts devouring books at a brisk rate.

Reading eventually interferes with her duties as Queen and people around her conspire to return things to normal. She embarrasses the Prime Minister and other dignitaries by asking them about their literary preferences, only to discover most of them do not read. The book builds to a crescendo when the Queen decides to dabble in writing herself and takes the necessary (and logical) step to allow her to do so.

This book is a love poem for reading, so any reader will love it. The humour is good and I did laugh out loud a couple of times (to the consternation of my fellow travellers). Even though I wouldn’t necessarily label it as “the funniest book in the world”, it is a book I recommend with all my heart.

President’s Obama appeasement speech in Cairo last week (a.k.a the “Salaam Aleikum speech”, see previous post) ruffled a few feathers in Israel, particularly those of Prime Minister Binyamin Netanyahu. The two leaders spoke on the phone yesterday, and if we are to believe the media, then this is a picture of Obama during that phone call: 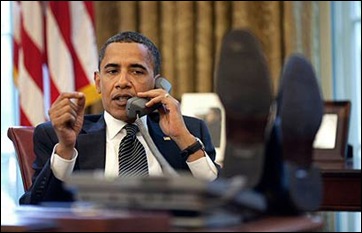 As they say: a picture is worth a thousand words.

Note the hand gesture. Note the feet on the table (side question: would you catch a Japanese politician with his feet up on the table? Not in a million years). Note the mouth open in speech. Note the eyes. You can almost hear Obama saying: “I’m telling you the way it is, Bibi”.

I would have loved to see a picture of the other side of this conversation. I can almost see the beads of sweat on Bibi’s forehead…

Obama and the Holocaust

So Obama gave his appeasement speech to the Muslim world. And, true to form, he made sure not to forget to mention everyone and everything. Here is what he had to say about Israel:

Around the world, the Jewish people were persecuted for centuries, and anti-Semitism in Europe culminated in an unprecedented Holocaust. Tomorrow, I will visit Buchenwald, which was part of a network of camps where Jews were enslaved, tortured, shot and gassed to death by the Third Reich. Six million Jews were killed - more than the entire Jewish population of Israel today. Denying that fact is baseless, ignorant, and hateful. Threatening Israel with destruction - or repeating vile stereotypes about Jews - is deeply wrong, and only serves to evoke in the minds of Israelis this most painful of memories while preventing the peace that the people of this region deserve.

Fair enough. But immediately following that come the Palestinians:

On the other hand, it is also undeniable that the Palestinian people - Muslims and Christians - have suffered in pursuit of a homeland. For more than sixty years they have endured the pain of dislocation. Many wait in refugee camps in the West Bank, Gaza, and neighboring lands for a life of peace and security that they have never been able to lead. They endure the daily humiliations - large and small - that come with occupation. So let there be no doubt: the situation for the Palestinian people is intolerable. America will not turn our backs on the legitimate Palestinian aspiration for dignity, opportunity, and a state of their own.

I don’t know why Obama felt he had to mention the Holocaust. And, undeniably, the Palestinians do deserve a state of their own and an end to their suffering. But following up on the Holocaust with an insinuated parallel to the suffering of the Palestinians is a grave mistake. It detracts from the message that the Holocaust deniers are wrong and it makes an implicit comparison where such a comparison does not, and cannot, exist. In his unrelenting quest to please everyone Obama has (unintentionally?) made a grave faux pas.

The same goes for his later mention of Iran and the nuclear threat, where he lumped the Iranians with an amorphous mention of the NPT. But that’s another discussion.

Obama’s credit is running out fast. My guess is a real test of his global leadership is not far away. We will then know if this great orator can also execute.