Manga - Comics for All

Any person visiting Tokyo will immediately notice the widespread use of animation and comics. At least half of the people reading on the subway will be reading comics. Posters advertising products and services use animated characters. Even respectable organizations will use animated characters: the police use an animated character as their mascot, construction workers put up signs with cartoons showing the way around the pylons and All Nippon Airways has a few of its aircraft painted with Pokemon figures: 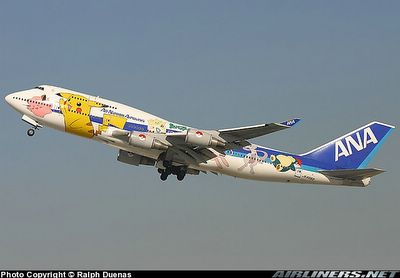 Anime (アニメ in katakana) is the Japanese term for animation, apparently a shortened form of the English word. Locally, the more common word for this art form is Manga (マンガ). There are hundreds of manga publications availalbe for sale on every street corner. Entire shops are dedicated to manga (both comics and animation) and some Japanese go to "manga bars" after work to discuss the latest and greatest manga over a glass of beer. At first, it is a little disconcerting to see a 50-year-old man in a business suit standing in the train and reading comics, but after a while one gets used to this common sight: 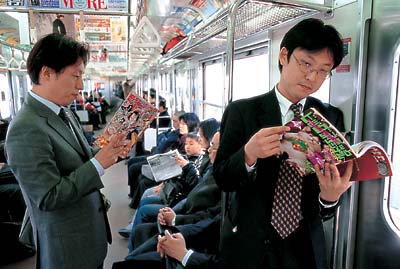 If one is disinclined to spend money in order to read a manga read, no problem. In all convenience stores and bookstores in Tokyo there are long rows of shelves offering a wide selection of manga and anime literature. At any time of day (and night) one can see people standing and reading entire books, sometimes for hours on end. Nobody tells them to buy the book if they want to read it... In fact, this practice is so widespread that there is a special term in Japanese for these people: tachi-yomi, literally "standing - reading". And there's a whole etiquette for tachi-yomi: the front copy is the one to pick up and read, so as not to wrinkle the other copies available for purchase; bending down to the thigh-high shelf is done by bending one's knees, in order to avoid taking up too much space; and the line will always move from right to left.

Anonymous said...
This comment has been removed by a blog administrator.
1:53 AM

Hey, you have a great blog here! I'm definitely going to bookmark you! I have a
japansite/blog. It pretty much covers japanrelated stuff.
Come and check it out if you get time :-)