During a brief visit to London last week I managed to go see a play at the West End: Some Girls by Neil LaBute, starring David Schwimmer (a.k.a Ross Geller from Friends). I thoroughly enjoyed it, despite the cramped seating of the Gielgud theatre. 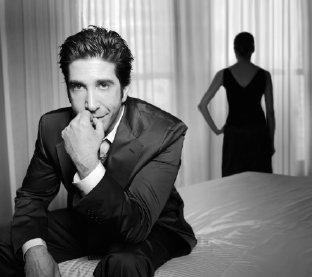 This is David Schwimmer's debut in the West End. He plays a man who is about to get married and decides to visit four of his ex-girlfriends. Just before taking the plunge to the other side, he wants to make sure that he is making the right choice. He also wants to make amends for some of the hurt he has caused in the past, such as going to the prom with another girl or running away from an illicit affair with a married woman. As the dialogue with each woman progresses, he finds out how little he actually knows about what they felt, and indeed still feel, about him.

The play is funny, but at the same time it touches on some of the finer points in the relationship between man and woman, of couples who have been very close to each other and in hindsight are surprised to discover new things about themselves.

If you get a chance to visit London (and the tickets for The Death of a Salesman are sold out...) this play is well worth watching.

Thanks for the tip. Seems like something worth going to see.