I never really understood the hold gambling has on some people. On my visits to Las Vegas I have watched those people sitting in front of the slot machines, mechanically pushing the buttons or pulling the lever, watching the wheels turn round with glassy expressions for hours on end. I understand these people have a problem but I cannot grasp the depths of human misery that drives them to such senseless behaviour.

Pachinko is, by far, the most common form of gambling in Japan. A Pachinko machine is a cross between a pinball machine and a slot machine. The player buys a large number of small steel and, using a small knob, controls the speed at which the balls are fed into the machine. The balls drop down through an array of pins and are mostly ejected from the machine but, if you're lucky, some of them go through a gate which give the player points (i.e. more balls). At the end of the day, the more balls you're left with, the better. A modern, and increasingly more popular, version of the game is the Pachislot, basically a slot machine. 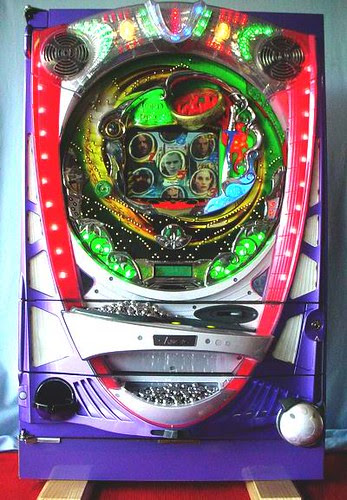 Pachinko parlours are usually located near train stations. They are noisy and smoky places, with a dazzling display of coloured lights and incessant annoying background music. Players sit in long rows in front of the machines, their right hand permanently on the knob and their eyes fixed on the dropping balls. It's a sad sight. Because gambling for money is illegal in Japan, the player can exchange the balls he earned for prizes such as stuffed toys, pens or cigarette lighters. Then, once outside, he can exchange these prizes for money at the small shops near the parlours that exist for this sole purpose. Neat loophole.

Allegedly, today's pachinko parlours are mostly owned by Korean immigrants and natually there is considerable involvement of the Japanese mafia (the infamous Yakuza) in this lucrative business. Every summer, there are reports of babies suffocating to death in parked cars, left there to wait while their father or mother are busy playing Pachinko. 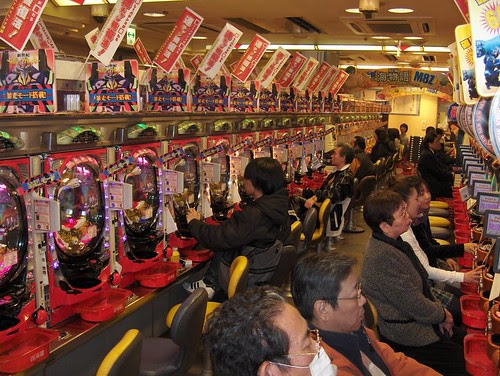 In my four and half years living in Japan I have never visited a Pachinko parlour. Last week, on a short visit to Tokyo, I decided I should check it out. I went to the parlour outside Akasaka-Mitsuke station with a colleague from work. He was my tour guide. I inserted a 1,000 yen note (about $8.5) into the machine, got my balls, and started feeding them into the machine. Frankly speaking, there is absolutely nothing to it. It doesn't look as if the speed at which the balls enter the machine matters, although my friend insisted that I hold the knob so that the balls hit a specific area in the needle array. About 20 minutes and 5,000 yen later I got the point and put an end to my short and inglorious Pachinko career.

I was flicking through your blog and somehow missed this interesting post. Fascinating. gambling in any form seems universal. I am not sure about the "depths of human misery" that bring people to become addicted. I reckon that just as in any other addiction, there is always some underlying emptiness/stress/ pathology/discordance/whatever, but I think that some people are just more succeptable to the adrenaline high of gambling than others.
Enough with psycho-neuro-socio links. I noticed somethig else interesting in one of your pictures. There was a man sitting with a white mask on his face. Is that standard dress in Tokyo ? What is the polution status?

Japanese wear masks mostly during hay fever season (Japanese term: kafunshou, as a large percentage of the population suffers from allergies. Some Japanese will wear a mask when they have a cold, so as not to infect others.

"so as not to infect others..." wow- such tsaddikim.

Thre is a Nafka Mina to this story: the Mussar Heskel of it is that if you really want to gamble, play only money that you can afford to loose. And fill your car's tank before you enter the casino.

And, even better, try to play pachinko for free and not for real money, if at all.

And anyway, a Ben Torah should find better things to do than play casino games.