Whenever I can, I try to catch a play in the West End. Problem is I dislike musicals and almost all plays in London are musicals. My preference is for comedies, especially ones with dry British humour, and occasionally the serious dramatic play. So I've seen most of the non-musical plays and a couple of times I just turned back from the TKTS booth in Leicester Square empty-handed. Last week I was fortunate enough to get last-minute tickets (albeit in the balcony) for Boeing Boeing, a comedy playing at the Comedy Theatre. 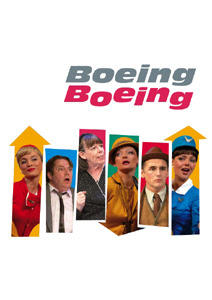 The play is set in France, where Bernard (a successful architect) has three girlfriends, all air hostesses. His life is a delicate balancing act, constantly coordinating between the timetables of the three airlines - TWA, Lufthansa and Alitalia - to make sure only one girl at a time is in his flat in Paris. An old school friend, Robert, turns up unexpectedly and is drawn into this balancing act.

Needless to say, things go wrong and the three beauties turn up in Paris at the same time. From now on, this comedy is a continuous series of chaotic scenes of mayhem, with Bernard and Robert vainly trying to make sure none of the girls meet, even when all three are in the flat.

The sixth actress in this movie is Bernard's housekeeper, Bertha, who reluctantly plays along with her master's whims, but does not miss a chance to impart her sarcastic comments. The plot sounded familiar to me, but it was only after the play that I realised it was made into a movie - two versions, French and American; I watched the American version, with Tony Curtis and Jerry Lewis, ages ago.

Frankly speaking, this kind of humour is not the kind that usually makes me laugh. Adding to that the fact that the balcony seats were extremely cramped and the theatre was over-heated, my expectations were not too high. However, the actors were all so brilliant that I actually ended up enjoying the play very much. Bertha in particular (Frances de la Tour) was outstanding. Her whole demeanour, a mix between "I couldn't give a damn" and "there we go again", was absolutely hilarious. Bernard's (Roger Allam) performance was also stupendous. Needless to say, the three girlfriends were absolutely gorgeous, but the German one especially pulls off a great performance with her fake German accent.

The middle-aged lady sat next to me was as hilarious to watch as the play; it was obvious the play made her want to laugh, but being English (stiff upper lip and all that) she was fighting hard not to laugh out too loud. At the end of the play she clapped furiously, stretching out her hands toward the stage as if to make sure the actors heard her clapping above everyone else's.

All in all, a rather pleasant experience, especially if you're in the mood for some whacky humour.

What was that you mentioned about only getting to see the "magic triangle" ?

Your description of the " middle aged lady" was at first rather funny but at second thought left me up in arms, it being a bit ageist, sexist, and anti - British! The thought of her ecstatic uninhibited clapping is touching - bless her. I like the British - and after a few pints they have no problem laughing as loud as you want :-)