I hesitated before buying and reading this book. After all, I am not a big fan of Breslover Hasidim, especially the born-again, light-in-their-eyes, street-dancing, Uman-going kind. And that's an understatement. After having finished reading the book, my ambivalence persists. 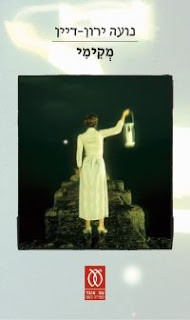 Noa Yaron was a radio and TV celebrity in Israel in the early 90s. She was exposed, like many in her circle, to the teachings and writings of Rabbi Nachman of Breslov, the 18th-century founder of the Brelover movement. Today, at the age of 35, she has six children and spends her time disseminating the teachings of R. Nachman to any woman who will listen. Everybody in Israel is aware of the Breslover Hasidim, as their ill-founded mantra (Na-Nach-Nachma-Nachman-MiUman) is plastered on walls, stickers, kippot, t-shirts, etc. This quasi-messianic sect of Judaism works particularly well for those seeking a Judaism that is somewhat "new-age", an alternative to seeking the truth in a remote Ashram in India.

In this book, Yaron-Dayan describes her path to the light. Mekimi in Hebrew means "the one who lifts me" and is derived from a verse in Psalm 113 - "He who raises up the poor out of the dust, and lifts up the needy out of the dunghill" - an appropriate metaphor for how she sees her journey. Although Yaron-Dayan describes the book only as "semi-autobiographical", for example she names the woman Alma and her boyfriend-husband Ben (her husband's name is Yuval), it is based on diaries she wrote during the years and is therefore a good account of the processes she went through.

The book opens with an account of the secular world, the world Yaron-Dayan knew well, a world that made a star out of her. The description is, as expected, quite glum: materialism is the only religion, drugs are being smoked on a daily basis, relationships come and go and there is this huge void in everyone's stomach, a void that cannot be filled by anything or anyone. The process begins halfway through the book, when Ben, at the behest of a good friend, agrees to listen to a lecture by an ultra-orthodox person, a lecture that transforms him completely. He begins his own journey towards Judaism and Alma, his partner, joins. The last part of the book is a shameless praise (propaganda) for R. Nachman.

So why am I ambivalent about this book? It is well written. Yaron-Dayan has not lost her sense of humour and the book is interspersed with witty remarks, some of it refreshingsly self-defecating. But more importantly, it is genuine. Her passion and her ardent belief in her newly-found way are palpably present in every page of this book. Yaron-Dayan does not embellish the process she went through (and is still undergoing). She makes it plainly clear that becoming, and staying, religious is a continuous struggle. One does not "see the light" and change his/her ways overnight. There are endless obstacles along the way. It does not feel like a path but rather like a roller-coaster ride, where every high point is inevitably followed by a fall. The trick, as Yaron-Dayan vividly demonstrates through her own experiences, is how to make it up the next slope, to the next high point.

And yet I cannot completely identify with what this book is about. Yaron-Dayan is trying to convince us (that is, the secular among us) that if we become religious we will be happier. The recurring theme in this book is: Judaism is the key to personal happiness. If you feel a void in your life, Judaism will fill it. I do not believe this to be true, neither in practice nor on a theological level. In practice, this is a dangerous approach; although for some people finding Judaism may mean finding happiness, this feeling might be temporary and then the question is, what happens next? If Judaism loses its initial lustre, does that mean we go back, or try a new approach?

More importantly, defining religion in an anthopocentric way is theologically wrong. Judaism is first and foremost a theocentric religion; God is in the centre and man's purpose is to worship Him. We are commanded by God and the mitsvot we are to fulfill are a yoke. Promising happiness to people is dangerously close to subjugating God to our purposes, in other words, close to avodah zarah. While I identify with Yaron-Dayan's focus on the quest rather than on the target - she understands the target is unattainable and the best we can do is strive constantly to reach it, even though we know it is impossible - I cannot identify with the proposition that our happiness is the main purpose of this exercise. This is the source of my criticism of the Breslover way (and, indeed, Hasidim in general).

I hear what you say about the dangers of presenting Judaism as the key to human happiness and I understand where you are coming from. However, on the other hand, if secular people are looking to fill a void, how harmful could a discovery of Judaism be when compared with other common void fillers ( workaholism, other aholisms, Budhism, Prosac)? It only affects a few people anyway, and if the initial motivating "happiness" diminishes and they go back to old ways- so what. No harm done.
Secular Jews, especially I think those who were not born into an observant Jewish lifestyle really have a problem just finding an opening in. Perhaps some are searching for a higher meaning in life, wanting to belong, to rise up and see a greater picture, however, with the absence of unquestioning faith, ideas such as "filling a void" and seeking happiness can be identified with and give at least a helping hand towards the worship of God.

No no, please not self-defecating. I am sure you meant self-depricating.

You're right. But the correct spelling is self-deprEcating :-)

I noticed that too - but I didn't give a shit. Hahaha.

You know what they say about word slips...

I am watching the TV show made based on the book so was interested in the book review. The TV show (up to ep.5 ) is quite good..