Let's not beat around the bush. If I were ever asked to make a list of the ten worst books I've ever read, Atonement would be on that list. And pretty high up.

I read Saturday by Ian McEwan a few months ago; picked it up at an airport. I liked it. So when I saw the movie Atonement was playing on several of the flights I was recently on, I decided to get the book first, before watching the movie. What a mistake. 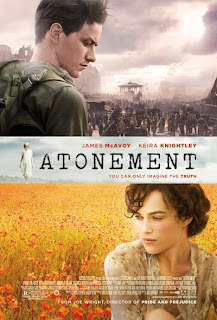 The plot of this book is superficial, not to say cheesy (a girl falsely accuses her sister's boyfriend for raping her cousin, and a long journey of "atonement" begins). McEwan's talent for descriptive writing is lost in tediously long passages that made me flip back a few pages just to remember where the story was left off. I found myself not caring what would happen next, but calculating how many pages I have left. The book took me ages to read; time and again I found myself yawning after a few pages, then dozing off into blissful sleep.

Why waste words on such a terrible book. I have no idea why it became a bestseller and what all the hype is about. On a recent trip to London I bought On Chesil Beach, so I'm going to give McEwan another chance. Hopefully Atonement is nothing but an aberration.

I should have known though... Through the book cover (I got the mass paperback version, depicted above) I learnt that the main character in the book - that annoying, whining, wish-I-could-smack-her, spoilt brat - Briony, is played by Keira Knightley, one of the worst actresses recently seen on the big screen. On second thoughts, what a fitting choice...