In Outliers, Malcolm Gladwell purports to explore the root causes for success: what is it that makes people successful. Not just ordinary people, but outliers, those who are so accomplished that they lie outside normal experience. His basic claim is that the characteristics and personality of the individual are not the main explanation for their success. Rather, it is their environment which is the determining factor: when they were born, what culture and values they grew up with and how their family and community shaped them.

Here are a couple of examples: 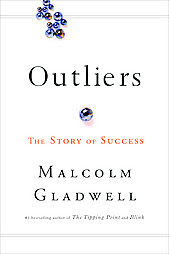 By far the most interesting story in the book is the chapter about the relationship between national culture and plane crashes. Gladwell analyses the example of Korean Air, who had a terrible crash record in the 1990s. Reason: the deferential, hierarchical culture of Koreans prevented first officers from challenging the captain's decisions in the cockpit even when these decisions were tragically wrong. (No chance of that happening in an EL AL cockpit, I guess). The same is true, apparently, also in Colombian culture.

Outliers is a very entertaining book, and Gladwell is a gifted writer. But as with his previous books - The Tipping Point and Blink - I was left with a feeling that this is more of a collection of anecdotes rather than a rigorously researched study. It is almost impossible not to be captivated by Gladwell's narrative, but after the initial "wow" effect, one finds several holes in his "theory of success". If Korean Air planes crashed because of Korean culture, why does Asiana (the 2nd airline in Korea) have a good safety record? And if working in the rice paddies shaped the champions of mathematics and science among Asian immigrants, why did the same not happen to West African immigrants, who also grow rice for a living?

It seems at times that Gladwell shot the arrow then painted the target. He had a theory and then looked for examples that support this theory. Not to mention the fact that if you believe Gladwell, then it really doesn't matter how smart you are and how hard you work. If you were born in the wrong generation or to the wrong parents, your chances of becoming exceptionally successful are very small. That is a very discouraging thought, especially in the prevalent American culture, so my guess is not many will like this book.