A couple of years ago I watched the play 39 Steps at the Criterion theatre in the West End. It was a brilliant production, with four actors playing dozens of roles in a comic rendering of the 1935 Hitchcock movie (which, in turn, was loosely based on the 1915 novel by John Buchan). I enjoyed it very much. So last night I decided to take my wife to see the Israeli version of 39 Steps at Bet HaChayal in Tel Aviv (originally, it played in HaBima). 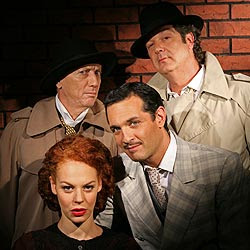 The Israeli version is an almost exact copy of the British version. Same set, same clothes, same mannerisms. But not everything can be successfully duplicated. The play takes place in Scotland, so the Scottish accent and dialect of some characters in the British version played a major role in the story (the farmer going to tend to his "coos" was particularly funny). This was completely lost in the Hebrew version, even though the actors did their best to put on different accents. Disappointingly, even the relatively "translateable" German accent of the Annabella Smith character was lost in Hebrew.

Two of the actors are Moni Moshonov and Avi Kushnir (top two in the picture), who are famous comedians here. However, I felt this played against them. Both are strongly associated with the successful long-running TV comedy sitcom Zehu Ze of the 70s and 80s, which was a funny show but mostly used shallow and noisy humour. At times it seemed like the play risked degenerating a re-run of Zehu Ze with Moshonov and Kushnir cracking up at their own funny jokes.

In short, I was quite disappointed with the Israeli version of the play, but I guess it isn't entirely fair to compare it to the award-winning British version. I would still recommend it to friends, especially if a trip to London isn't something they're planning in the near future.