I travelled through 6 different airports this past week, and witnessed the different attitude in each to the swine flu scare:

Haneda airport, Tokyo (arriving): a health form, hand washing with antiseptic liquid and a one-by-one thermal temperature scan before immigration, a form to carry while in Japan with contact information if symptoms occur

Pudong airport, Shanghai (arriving): a detailed health form, the air crew took temperaure of each passenger, upon landing – scary looking uniformed quarantine officials came on board and checked each passenger again for fever, another inspection before immigration

Pictures from inside the Air China aircraft, after landing in Shanghai, a definite “Cassandra Crossing” moment: 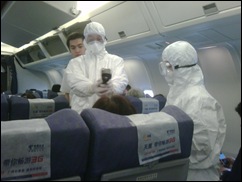 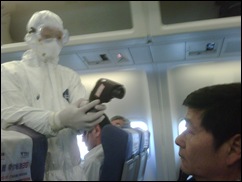 (By the way: I tried to post this while in Shanghai, but the connection to the Blogger server was blocked. Not only for posting, but also for viewing the blog. No access to YouTube either. Welcome to the People’s Republic of China!).

William Dwek said...
This comment has been removed by a blog administrator.
12:50 AM

William Dwek said...
This comment has been removed by a blog administrator.
12:51 AM

William Dwek said...
This comment has been removed by a blog administrator.
12:52 AM