As strange as it may sound – being an Israeli who lived and travelled in Asia quite extensively – this was my first visit to Thailand. I have been through Bangkok airport several times, and I think I even stayed overnight at the airport hotel once, but I’ve never ventured into the city itself. Last week I attended a two-day conference in Bangkok and then decided to stay on for a couple of more days and see the city.

Compared with the average Israeli (that’s mode average, mind you) I’m more than twenty years late in visiting Thailand. For my “post army” trip, my (future) wife and I chose the civilised option; we toured Europe. In fact, until this very day we pretty much stay away from “third world” or generally unclean places when we go on holiday. In Asia it’s Tokyo and Singapore for us, not Mumbai or Bangkok. Anyway, given this background, I guess most of my observations here will be met with a duh! from the average Israeli reader, so be forewarned that this post might be somewhat boring to you Bangkok connoisseurs.

Encouraged by the fact it wasn’t raining much, despite a forecast of heavy thunderstorms, I spent most of the time just walking around, occasionally glancing at the map to make sure I knew more or less where I was. I wasn’t in the mood for the “obvious” tourist sites, such as the Grand Palace or the various temples (Wat). After all, how many golden Buddhas and elephants can a man take?

My first impression of the city was the contrast between old and modern, a contrast that has become very common in big Asian cities over the past couple of decades. Some of the buildings and shopping malls are top notch, surpassing many similar establishments in the West in style and luxury. But this is all mixed with old, decrepit buildings and poorly lit streets, some of which looked positively dodgy. As an example, here are pictures of my hotel and the view from my hotel window - note the squalid dwellings on the bottom of the second picture: 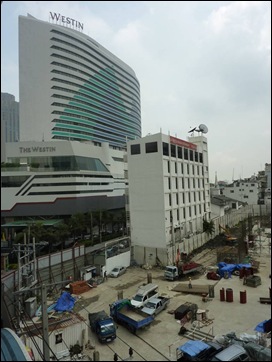 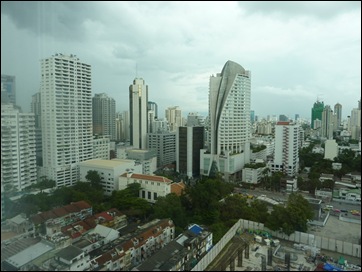 And another view, this time from the SkyTrain, the elevated train that crosses the centre of the city. Slums in the foreground, high-rise apartments (advertising at $200K+ for a 2-bedroom) in the background: 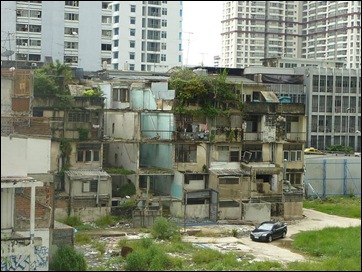 As a friend of mine told me at the conference, when he heard I was a newbie here: the first-time visitor to Bangkok walks around clutching on to his belongings and praying he won’t get stabbed by the barefooted Thais squatting on the sidewalks peddling their merchandise. However, after a couple of hours, the same visitor relaxes and becomes a happy, stress-free tourist, having been captivated by that ubiquitous defensive weapon of the Thais: the smile.

Because wherever you turn you see people smiling, especially if you happen to catch their eyes. And if you stop walking for a minute to consult your map, it is more than likely for one of them to approach you and offer help. One smiling Thai told me: “you are a visitor to my country, so you are my customer.”

It is true that some of these friendly people are touts looking to point you in the direction of a transport vehicle (more on that later) or a place of business offering services tailored for single men wandering around. But even they do it with a smile and back off almost immediately if you politely refuse their offer. At no point did I feel uncomfortable in any way.

But they don’t only smile. They also eat. Most sidewalks are packed with “makeshift-permanent” food stalls that are basically full-fledged family-run restaurants operating in the open air, most taking up no more that a couple of square metres of sidewalk space. The children wash the vegetables or cut the fish/meat, one of the the parents cooks and the other one serves customers. Pots and pans everywhere and customers sit on impossibly small chairs and tables to enjoy their meal. Quite fascinating really, considering that they are surrounded by exhaust fumes, a constant stream of pedestrians and a lot of street litter. 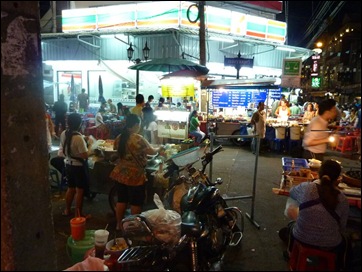 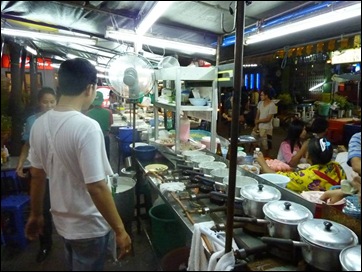 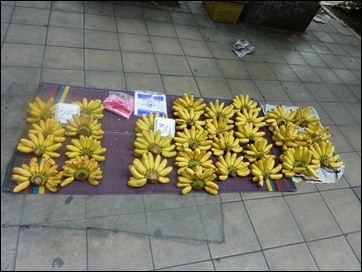 And it’s not only food you can get on the street. It’s a myriad of products and services that are on offer: clothes, handbags, jewellery, fake diplomas (Bachelor of Business from Bristol Univerisity, anyone?), seamstresses, cobblers and hair-braiders. 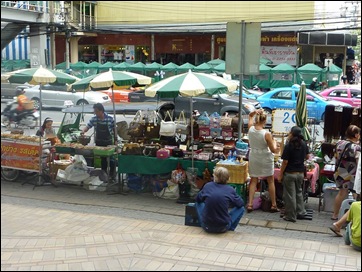 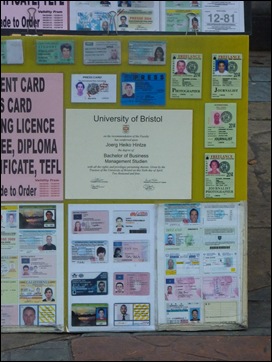 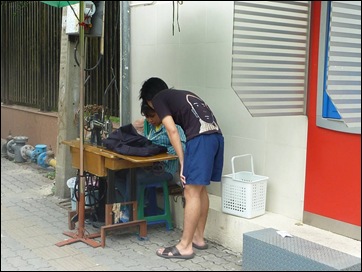 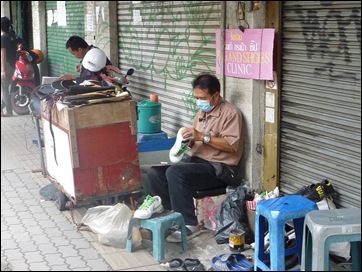 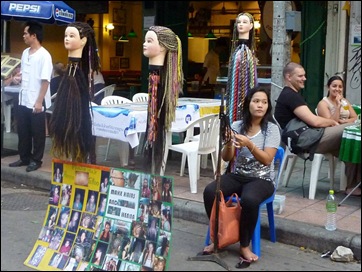 After my first day I realised I had forgotten to pack my new camera’s battery charger. I was directed by the hotel staff to Pantip Plaza, where I was told there were “a few electronics stores”. What an understatement. This is a 6-7 storey building packed to the seams with stores selling every conceivable piece of software or hardware you can imagine. For those of you familiar with Akihabara district in Tokyo, imagine the entire district folded up into one building. I found a copy of the charger I needed in no time. 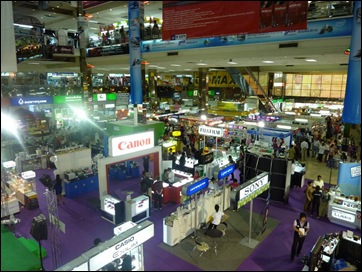 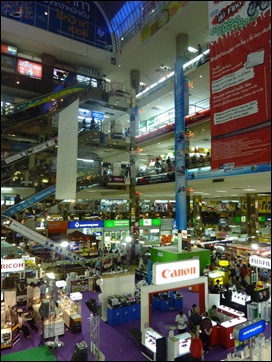 As for transportation. Getting around this busy city is not simple. All the stories about traffic in Bangkok are true. Most major thoroughfares are gridlocked at all hours of the day and night. On my way back to the airport we hit traffic at 5AM in the morning. 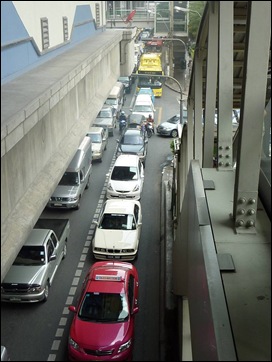 I mentioned the elevated train (SkyTrain), which is very convenient for avoiding traffic but unfortunately covers only a very small part of the city. Therefore, a plethora of transportation possibilities has evolved in Bangkok. Taxis are air-conditioned and cheap (meter starts at 35 Baht, about US$1), but not much use in heavy traffic.

Tuk-Tuk taxis (so called because of the racket their engines make) are everywhere, and their drivers will offer every passing foreigner (farang) a sightseeing tour of Bangkok for “very cheap price”. The price is negotiated in advance. If you’re a lone male tourist, they will invariably also offer to take you to a “good massage”. In fact, the “massage” industry is so prevalent in this city that even an innocent-looking ad for a clinic makes one wonder about hidden meanings: 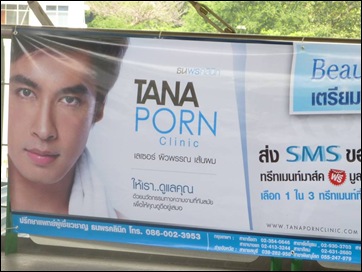 Here is one of my Tuk-Tuk drivers, the one who took me to Chinatown. Apparently, he moonlights in this job when he’s not assaulting aircraft hijacked by terrorists with his fellow SWAT team members: 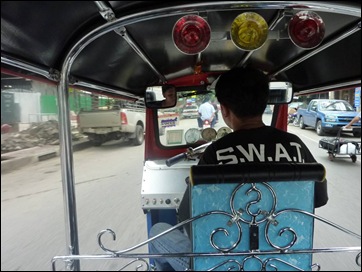 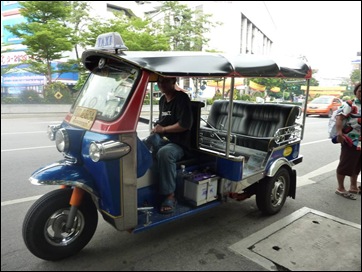 Although Tuk-Tuks are smaller in size than taxis and therefore more manoeuverable in traffic, they still need to be on the road. That’s just not good enough. So an even more flexible vehicle is on offer on every street corner: the moped or small motorcycle. If you don’t mind hanging on for your life while the driver negotiates his way through cars and pedestrians alike, this is the fastest way to get around.

By the way, what will a Tuk-Tuk driver do when he’s hungry? Simple. He’ll park his vehicle near a gutter, take out his fishing pole and patiently wait for fish – from the gutter! – to take the bait. You don’t believe me? Take a look: 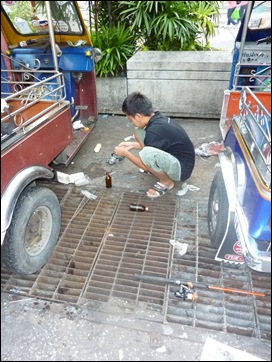 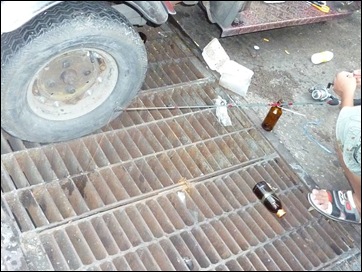 When I asked him what he was doing, he smiled (obviously) and proudly held up a small plastic bag with some foul-looking fish inside. I skipped lunch that day.

After the hearty meal, the driver will take a rest. This is Thailand, after all: 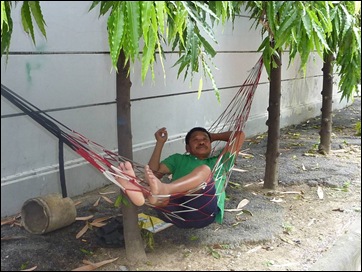 As for the Israeli angle. Israelis have become a prevalent feature in this city. An old joke tells about the airport taxi driver that, upon learning that his passenger is from Israel, asks how many Israelis there are. The passenger replies: about 6 million, to which the taxi driver says: no, I meant not in Thailand only, but in total.

As I mentioned in the opening, many young Israelis backpack in Thailand (and in neighbouring countries) after their military service. Hebrew can be heard everywhere on the “backpacker road” in Bangkok – Kao San Road – and the signs tell it all: 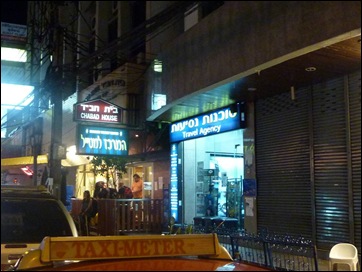 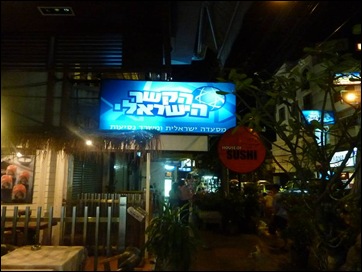 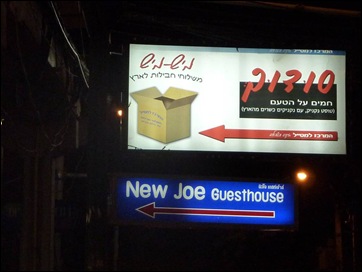 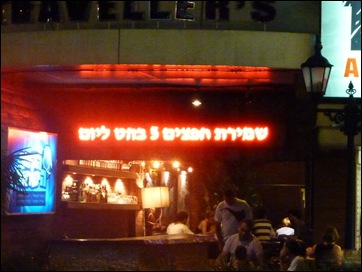 On my last night in Bangkok I went for a stroll through the Suan Lum night market near Lumpini Park. I expected a noisy and pushy market, but was pleasantly surprised to find a clean and orderly maze of stalls, and also relatively peaceful and quiet. I just wished that by then I hadn’t lost patience for the haggling over useless junk. The vendor basically names a price and if you hesitate for even one millisecond, he/she will say: “But you can bargain! How much you give me?” I saw this family from Australia that was really going at it; the children were total experts and even the vendor looked harassed. 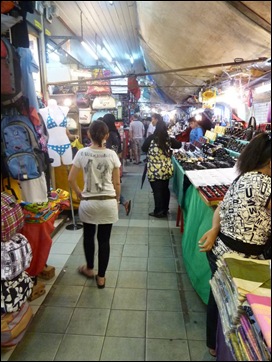 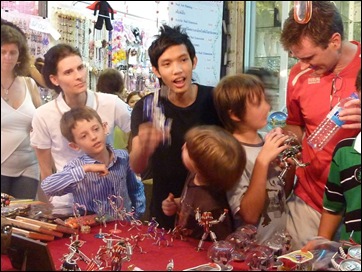 In summary, Bangkok is a very special city, well worth visiting even tough it isn’t exactly my cup of tea. After a few days I felt drained though. The pace of the city, the noise, the traffic, the pollution, the dirt, the haggling – it all started getting a little too much, and I was looking forward to leaving for Tokyo.

As I am writing this post from Tokyo, and I am thankful for the cleanliness and order around me, which I can now appreciate even more than usual. Shame about the prices though!

Story of this blog is well written. The writer kept in consideration the grammar very well. Level of English also very well. Lot many new words has been used while writing content of this blog.
เบอร์โทรรถลาก

Most of the blogs pretend themselves as most usable and updated blogs with new information but sometime truth might different. I want to share some facts related to this subject which will help people to enhance their skills.
บริษัท แม่บ้าน

It was really nice to read article written on this blog. I would also like to add few techniques with best of my knowledge which can help reader more and more.
รับขนส่งรถยนต์

Really appreciate all the stuff made by this blog to let people know more about this topic. I added little more relevant points to my knowledge which definitely going to help me in coming future.
Taxi Bangkok to Pattaya

I came to this blog and it helped me to add few new points to my knowledge. Actually, I am trying to learn new thing wherever I find. Impressive written blog and valuable information shared here.
บริการขนย้ายรถยนต์

Enthusiastic words written in this blog helped me to enhance my skills as well as helped me to know how I can help myself on my own. I am really glad to come at this platform.
รถสไลด์

This is actually good to read content of this blog. A is very general and huge knowledgeable platform has been known by this blog. I in reality appreciate this blog to have such kind of educational knowledge.
สรรพคุณ ถั่ง เช่า