Last night I attended the annual memorial rally for Yitzhak Rabin, shot 14 years ago in the square that now bears his name in the heart of Tel Aviv.

I took my son with me, to show him the place his mother and I stood on that fateful night and sang along with Rabin at the end of the peace rally, moments before he was shot. I also showed him the place where we saw his car speeding away after the rally, not understanding until later why the driver was driving so fast. My son was not born yet at the time, but in a way he was also present; he was a fetus on November 4, 1995. 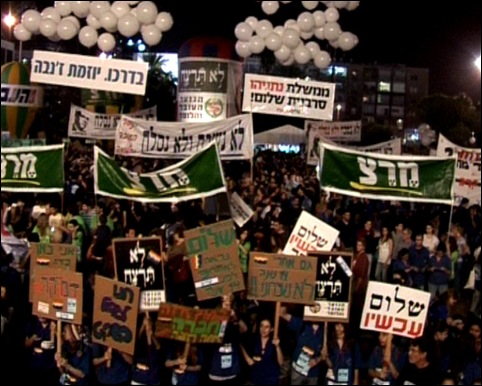 I had mixed feelings about the rally last night. On one hand I was pleased to see the square was quite full and with people both old and young. On the other hand, I was saddened (but not surprised) to count only a handful of people wearing a kippah. Many kids from youth movements like HaNoar HaOved and HaTsofim, but none from Bene Akiva. This central memorial rally, and generally the memory of Rabin, have sadly long ceased to be unifying events. We have learnt nothing.

The speeches at the rally were predictable and mostly pathetic. The only decent speech was actually the one given by the only representative of the “right wing” camp, Education Minister Gideon Sa’ar, who did not speak in clichés. To listen to Barak and Livni repeat the mantras of “now is the time for peace” is, quite frankly, nauseating.

Thomas Friedman got it right this morning in this weekly column: "The Israeli-Palestinian peace process has become a bad play. It is obvious that all the parties are just acting out the same old scenes, with the same old tired clichés — and that no one believes any of it anymore." Friedman’s conclusion, alarming as its implications to the region may be, is sorrowfully the correct one: "Let’s just get out of the picture. Let all these leaders stand in front of their own people and tell them the truth: “My fellow citizens: Nothing is happening; nothing is going to happen. It’s just you and me and the problem we own.”"

Call the White House, Ask not for BARACK, but for BARAK.

He’s the one calling the shots.

The Economist has an article this week with the heading: "Is Israel too strong for Barack Obama?"