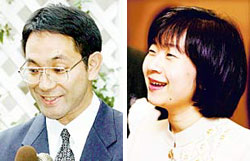 The royal family in Japan is serious business. Admittedly, the Emperor is no longer a divine figure (the Americans saw to that after WWII), but many Japanese still regard the royals with respect and the sport of "royal watching" has numerous fans here, not unlike Britain.

This week, the royal palace confirmed reports that Princess Sayako, the 35-year-old daughter of the Emperor, will be marrying Mr. Yoshiki Kuroda, a 39-year-old Tokyo government employee. The two have known each other since childhood and went to the same university. This wedlock spells the end of royalty for Princess Sayako, who will become (gasp!) a commoner and will be known as Mrs. Kuroda. Her childern will have no rights of succession to the Japanese throne.

Princess Sayako has become a symbol for many Japanese women, who in increasing numbers decide to postpone marriage or indeed pursue a life of celibacy. Marriage and birth rates in Japan are decreasing dramatically and in a few years the population will start to decrease. In offices, it is not uncommon to see single women in their late 20s to late 30s, or older women who are married but with no children (the so-called DINKs: double income, no kids). However, unmarried women are still considered "losers" in Japanese society, as is evidenced by the saying that a woman has "succeeded" in marrying. By marrying late (and "out"), Princess Sayako's status as a role model is inspiring hope into many 30-something single Japanese women.