The attacks of September 11th have spawned a plethora of books about Islam and the Middle East, all trying to explain to the bewildered Westerner how those planes came crashing out of the skies on that bright and fateful autumn day. Occidentalism is one of these books, the authors taking the opportunity of the hightened attention to write a book that, although not officially positioned as such, is an attempt to form a response to the late Palestinian intellectual Edward Said's famous 1978 work: Orientalism. 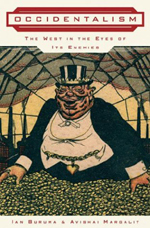 I read this book largely because I enjoyed another book by Ian Buruma about the history of Japan. Unfortunately, Occidentalism is a far cry from the eloquent and gracious Inventing Japan. Buruma and Margalit succeed in combining their knowledge into one book that does not read as if it was written by two authors, but fail in making a clear and coherent argument to explain Occidentalism (i.e. the way the East views the West). Although they try to bring together the many cultures and nations of the Occident, including Asian history, their analysis is most meaningful only when they write about Islam, which I suspect was what they set out to explain in the first place.

Buruma and Margalit begin by listing the main differences between the West and East, as these are perceived in the eyes of the East: the West is urban - the East is rural; the West is capitalist (see the picture on the book cover) - the East values social values; the West is materialistic - the East is spiritual; and, of course, the West is always evil, out to destroy or at least conquer and subdue the East. Then they set out to show that most of the (mis)conceptions of the East about the West - i.e. Occidentalism - is nothing but a product of the West's (or, more precisely, European) influence and ideas. So basically the East is using Western thought and philosophy and adapt it to its needs, turning against those they perceive as evil, the West.

There are a few problems with this argument. First, the Orient cannot all be lumped into one basket. Arguing that Japanese nationalism, German nazism and Muslim fundamentalism all come from the same roots and share the same view of the West is stretching it a bit. Second, the Occident itself is not homogeneous. For example, the authours bring Jewish Zionism as an example of the "evil West", providing a very simplistic view of Zionism as "Jews buying land with money from Arabs". Third, the authors seem to ignore the widespread ties between West and East - e.g. the US-Japan relationship, or the backing of the Gulf states by the US - as these ties would blow holes into the neat Occident-Orient divide they try to picture.

Despite its flaws, Occidentalism is a good read (and it's a short book), as long as one approaches it as one would approach an essay or a commentary column in the newspaper, not a book that purports to explain the problem of "the West in the eyes of its enemies".