Samba in a Kimono

Can an actor known for his role as a Samurai warrior become a king of samba? In Japan, the answer is yes. 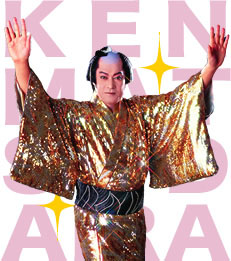 Ken Matsudaira, one of Japan's most famous actors, best known for his role as shogun in a long-running TV series, is currently a huge music phenomenon here with his "Matsuken Samba II" hit (Matsuken is his nickname, a combination of his last and first name).

Last week he filled Tokyo Dome with 20,000 fans who danced and shook their backsides in sync with Matsuken. The king himself appeared clad in a golden kimono outfit, complete with the samurai hairstyle and white-painted face, surrounded by dozens of male and female dancers in similar outfits.

So "hit the bongo, sound the samba" as the lyrics go, and join Matsuken in the new samba craze sweeping over Japan. Here's an audio sample: Windows Media Player.

Hi, I am a Japanese woman living here in Saitama Japan. I saw "Matsuken Samba Special Concert" which was held in Saitama, May 1st. It was so exciting and thrilling!
The hall was filled with over 2,000 people -- from small children to the elderly and all of them (including me!) stood up and clapped hands with the actor, Ken Matsudaira, with the rhythm of Matsuken Samba! It was a wonderful show, indeed!
Ken Matsudaira is a very well-known actor here in Japan. He often performs Samurai in serious dramas, so there is a huge gap between his image of Matsuken Samba and that of Samurai, and that is what attracts us most!