Education for Manners on the Train

Any person reading a reference book about Japan, be it a guide book for tourists or a "how to" book for business people, will most likely come across a section entitled "Japanese Manners" or "Japanese Etiquette". This section is there to teach the ignorant peasant from the West how to behave around the superiorly well-behaved Japanese. Depending on the diligence of the author, this list of rules can easily run up to hundreds of entries, from the basics - how (not) to shake hands; how to present and receive a business card; how to use your chopsticks - to the more advanced: how to behave at a funeral; how to avoid confusion between tatemae and honne; how to fill your colleagues' beer glasses.

Some gaijin (foreigners) may get the false impression that Japanese people are naturally well-mannered. Somehow we are led to believe it's all in the blood, or at least in the ancient culture, a remnant of the bushido code of conduct of the Samurai so cheaply rendered in Hollywood films. But it is not so. Anyone living in Tokyo is bewildered by the inordinate amount of efforts undertaken by the government and public organizations to educate the masses on proper behaviour. This is especially evident in the public transportation system.

Japan leads the world in the business of moving people around. A country with almost half the population of the U.S. inhabiting a landmass about the size of California has no other choice. The public transportation system of Tokyo moves tens of millions of people daily and to do that it must rely not only on its superb infrastructure but also on the cooperation of its customers. I have often commented to Israeli friends who expressed their wishes to have a subway system like Tokyo's in Israel, that it takes two to tango; the system works here not only because it is efficiently constructed, but also because the masses are educated to use it in a proper way. One cannot expect a station like Shinjuku for example, through which about 2 million people pass through each day, to function properly (or, indeed, at all) if the crowds do not adhere to certain rules.

To ensure this adherence, passengers are constantly reminded how to behave. Here are a few examples, taken from posters in Tokyo subway stations:

1. Never rush onto a departing train: 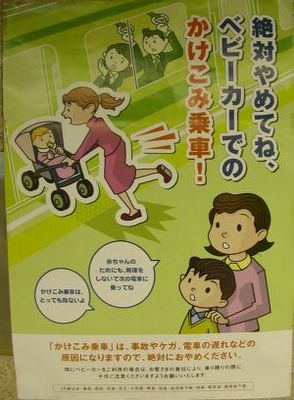 2. Don't take up too much space when sitting down: 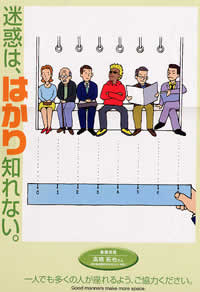 3. Don't speak on the mobile phone: 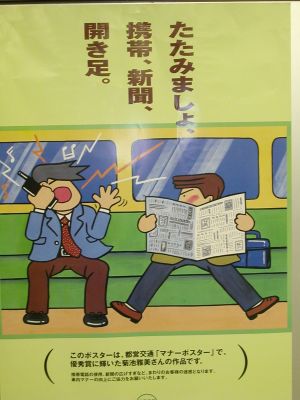 4. Following a sharp rise in "groping" cases, especially during rush hours when people are crammed together like sardines, a campaign for speaking up against offenders: 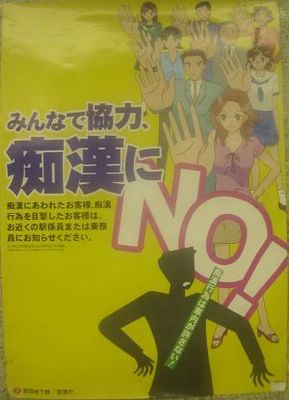 And this is only a sample. People are asked not to eat or drink on the train, to fold the newspaper they are reading so it doesn't take up too much space, to stand to the side of the doors so that people can get out before stepping onto the train, etc.

The younger generation seems to flaunt some of these rules. It is no longer unusual to see a youngster speaking on the mobile phone on the train, or having a quick bite. Indeed, Tokyo has seen its first case of "mascara rage" last month, when a teenage girl pushed an elderly lady on the platform and the lady was hit a moving train and required hospitalisation. Why did the girl push her? Because the lady made a comment that putting make-up on in the train station is impolite...