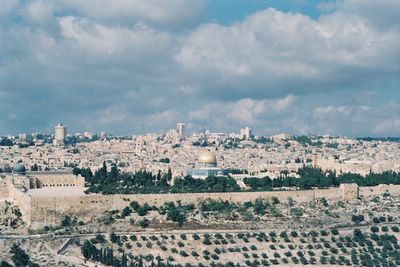 Today, 28th of Iyar, is Yom Yerushalaim - Jerusalem Day. On this day 38 years ago (June 7, 1967), during the six-day war, eastern Jerusalem and the Western Wall were liberated by the Israeli army. The Israeli parliament passed a law in 1968 designating this day as an official holiday (though, sadly, not a day off work) and the Chief Rabbinate instituted special prayers to be added to the regular prayers, inlcuding Hallel, just like on Yom HaAtsmaut (Independence Day).

Jersusalem became the focal point of the Jewish people since it was dedicated by King David almost 3,000 years ago, in the 9th century B.C.E. According to Jewish law, certain things could be accomplished only by going to Jerusalem in the days of the Temple: the Passover sacrifice, various tithes, the First Fruits, etc. This led to the view in the Mishna that Jerusalem is more holy than the rest of the Land of Israel (Kelim 1, 8). In the Talmud there is a debate about the enduring holiness of Jerusalem and whether this holiness exists today or not. Without going into the various facets of this discussion, there is no argument that Jerusalem is central to Jewish thought and history. We mention it in our daily prayers; every synagogue in the world is built facing Jerusalem; and in one of our happiest moments, during the wedding ceremony, we recite the following verse:

If I forget you Jerusalem, let my right hand forget its cunning. Let my tongue cleave to the roof of my mouth if I remember you not, if I set not Jerusalem above my chiefest joy.

And yet Jerusalem today is not as we imagine it, not as we would like it to be. The Israeli-Arab conflict and the religious-secular divide are evident everywhere. It is one of the poorest cities in Israel and many neighbourhoods look like they are still stuck in the 19th century (and not in a positive way). It is a united city only in government brochures and nationalistic propaganda; few Israeli Jews would dare wander alone at night in east Jerusalem neighbourhoods. Every year the media reports the number of graduating Israeli school students that have never been to Jerusalem. More and more Israelis choose not to visit their capital city unless they have to. And many secular Israelis who were born and raised in Jerusalem move out to the surrounding suburbs or to Tel Aviv.

Despite all these problems, I love Jerusalem. I lived there for four years, during my studies at the Hebrew University, and to this day I remember those years with very fond memories. There is a lot of work to be done to improve life in Jerusalem and perhaps this work will never be truly complete. But to me the words of the Talmud ring true every time I remember Jerusalem and every time I visit it: "Ten measures of beauty descended on the world - nine were taken by Jerusalem, one by the rest of the world. There is no beauty like the beauty of Jerusalem." (Kidushin, 49:2).