I am Charlotte Simmons, by Tom Wolfe


This book is about the corruption of a young American girl from Sparta, a remote mountain town in North Carolina, who makes it against all odds to a top university in Pennsylvania ("Dupont"), only to find out that not top-notch education but rather sex, alcohol, drugs and generlly being "cool" are top-most on her fellow students' minds. Tom Wolfe paints a vivid picture of college life on American campuses, or at least that's what he would have us believe, not too successfully in my mind. 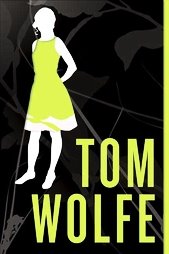 I guess Wolfe was out to write the definitive book about college life. And indeed the book is nothing but a long (700+ pages) description of the frivolities of college students. It is full of stereotypical characters: the basketball players who get academic discounts and lead a life (literally) above the rest, the drunken frat boys and the giggly sorority girls, the group of smart nerds who are after the Rhodes scholarship and, above all, the innocent hillybilly who cannot believe it all - Charlotte. Wolfe, in his charcteristic style, does not leave much to the imagination when describing Charlotte's encounter with college life. One of ther first experiences on campus are the sounds produced by a boy defecating loudly in the stalls of the co-ed bathroom (I will spare you the details). Shortly thereafter, Charlotte's room-mate throws her out in the middle of the night so that she can spend time there alone with her boyfriend; thus Charlotte learns what it means to be "sexiled". And so on and so forth.

Despite its weakness in credibility - I refuse to believe this is what life in Ivy League colleges is all about - what saves this book is Wolfe's excellent writing style, captivating the reader and transporting him to a world that although removed from reality seems at the same time very realistic. I read the book while travelling between three continents and it was a faithful companion on the long flights and sleepless nights. As far as pop fiction goes, it's an entertaining read.

One final thought. Wolfe, author of excellent books such as Bonfire of Vanities and A Man in Full, gives thanks in the foreward to the book to his daughters, who apparently let him into the secret lives of college students based on first-hand experiences. If I am Charlotte Simmons faithfully portrays what Wolfe's daughters went through in college, I shudder to think how he reacted, as a father, when hearing their stories.