Maccabees - Then and Now


A few minutes ago Maccabi Tel Aviv lost to CSKA Moscow in the European basketball finals in Prague.

The original Maccabees were warriors from the house of Matityahu the Hasmonean, whose name derived from the Jewish word for "hammer" (makevet) and who rose up in revolt and fought an heroic war against Hellenism in the 2nd century B.C.E. Their victory is celebrated every year during the festival of Hannukah.

I admit that I too am occasionally interested in the modern-day "maccabeem". I watched the second half (I missed the first half due to the Daf Hayomi shi'ur) and I too cheered for Maccabi during certain moments in the game. But the passion just isn't there any more. Why? Consider the following picture, from today's game: 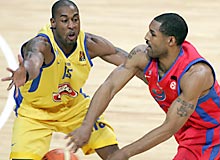 A Maccabi player against a CSKA player. Both 2nd rate players from the US, NBA dropouts or wannabees, mercenaries in the world of professional basketball. And yet they manage to stir up enough passion and interest among Israelis (me included!), who still view a victory by Maccabi Tel Aviv as a victory of "the Jews against the goyim".

I struggle to find that passion within me. It does not come easily. Gone are the days of a team of Israeli (or at least Jewish) players - like Mickey Berkowits, Motti Aroesti and Tal Brodi - who made me proud as a teenager growing up in Italy when they beat Mobilgirgi Varese in 1977. It's all business nowadays and passion for business I keep for my working hours, not my leisure time.