Never mind the daily rocket attacks on Sderot. Never mind the quasi-civil war raging in the Gaza strip. Never mind the thousands of Palestinians on the brink of starvation as a result of their intransigent government's policies. Foremost on the daily agenda of the media in most of the Arab-Muslim world is none of the above. It is John Painstil, the Ghanian soccer player that dared wave the Israeli flag after his team scored against the Czech Republic. Painstil plays for a soccer team in Tel Aviv and said he did it to please his friends and fans back in Israel. 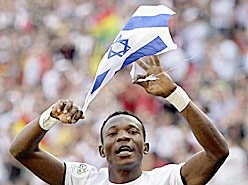 The uproar was such that Painstil later apologized for his misdeed. The spokesperson for the Ghana team said the gesture was "based on sheer naivety" and added that Painstil is being offered special therapy to ensure he "overcame his current state of mind"...

Israelis (and Jews worldwide) reacted to the admittedly exaggerated reaction in the Arab world with nothing but contempt and disdain. I'm wondering how these "shocked" observers would have reacted had Painstil waved a Palestinian flag instead of an Israeli one.

I have a different take on this "flag-gate" episode. Call me cynical, but perhaps this whole gesture was nothing but a shameless self-promoting marketing tactic, designed to boost Painstil's standing in the eyes of his Israeli employer? You see, the flag Painstil waved is one of millions issued on occasion of Israel's independence day last month by Israel's leading bank, the HaPoalim bank. The team Painstill plays for is HaPoel Tel Aviv. Need I elaborate further on this "apparent" coincidence? I dare not.

The flag scene did seem a touch bizarre to be genuine although
I feel I am a killjoy in agreeing with you. It's easier to follow along with the innocent version of it.

On another note, I have been following your blog for a few weeks now and it is outstanding in many ways. Thank you .

Does Bank HaPoalim own Hapoel Tel Aviv? That's sort of like saying that because a brewing company is located in Milwaukee, it owns the Brewers.

And he got free like a million other TelAvivians did. You're being much too cynical.

What I'm concerned about is that his therapy will involved abandoing HTA as a sign of his repentance and conversion to the anti-"Zionist" fold.

No, there is no relationship between HaPoel Tel Aviv and Bank HaPoalim. And, yes, I know he got the flag for free.

Evidently my sense of humour is pretty bad, as you seem to have taken my post a tad too literally...

Ah, that's the problem with a dry sense of humour. Like an autumn leaf, it floats. ;)

Anonymous - Thank you for the kind words. But why anonymously?

sharvul, don't blame your bad sense of humor. It's not the first time, and won't be the last, that an aspie has read something too literally.

Although I should have picked up on it. My own sense of humor runs very much on those lines.

Sharvul-
"anonymous" here- you are right, I should have a name.