This week, a Sumo stable from Japan - the Sadogatake Beya - is visiting Israel.

This is a rare happening, as Sumo wrestlers (rikishi) seldom leave Japan. They were hosted by the president and various other officials, "trained" children on Tel Aviv beach and visited a children's hospital (where I accidentally bumped into them yesterday morning on my way to work; fortunately, not literally bumped).

Last night they conducted a friendly tournament in Caesarea, at the ancient Roman open-air amphitheatre. I was pleasantly surprised, both by the almost-full attendance and by how well the whole thing was organized, complete with running commentary by Motti Dichne, who provided much useful information about the sport.

The "competition" was won by Koto-Oshu (a.k.a. Mahlyanov Kaloyan Stefanov), a Bulgarian who is currently no. 3 in Japan. His parents flew in from Bulgaria for the event. Increasingly, non-Japanese are excelling in Sumo; the current champion (yokozuna), Asa Sho Ryu, is from Mongolia.

I will not bore you with lengthy explanations about this exceptional sport (see link above for that); instead, here are some pictures from the event (click on pictures to enlarge): 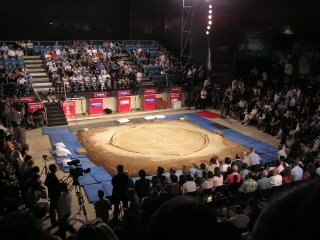 Dohyou - the arena, made of clay and sand 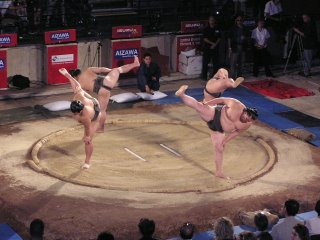 Fat, but extremly flexible and agile 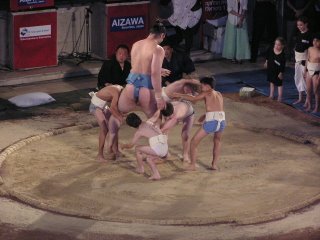 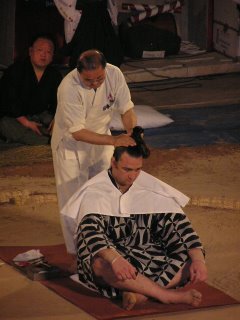 Koto Oshu gets his hair done; each wrestler has a distinctive hairdo 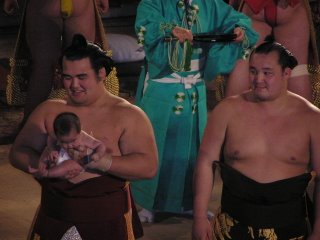 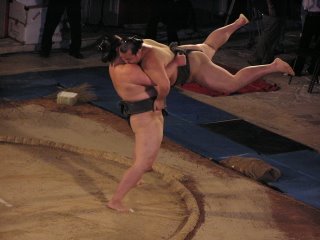 Tsuridashi - lifting opponent by mawashi (a.k.a "the diaper") 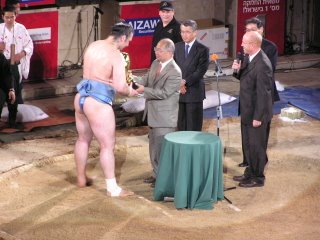 Koto Oshu and the cup

In short: At an amphitheatre in an ancient Roman city in the Jewish state of Israel, a bunch of Japanese wrestlers got their asses kicked by a Bulgarian.

i left you message last week, here http://nafkamina.blogspot.com/2004/11/in-beginning_08.html
did you read?

My bf also told me the Sumo went to dead sea and said they enjoyed a lot and will recommend Japanese people to come. It's quite funny to imagine their huge body could easily float in dead sea.

Yes, I read your message. Thank you.

I did not see the sumo guys floating in the dead sea, but I'm sure it was an interesting sight.