This is a book I've been meaning to read for a long time but it took me a while to get my hands on the original French version. I thought that a book written by a French intellectual and philosopher offering ruminations about America deserved to be read in French... A friend finally got me a copy in France last month and I took it with me on my around-the-world trip this month.

Bernard-Henry Levy (henceforth, BHL) is somewhat of a celebrity in France (perhaps the only country in the world where a philosopher can become a celebrity). In recent years, he has moved away from writing "pure" philosophical works towards a more journalistic role. In 2002 he spent almost a year, travelling to Pakistan several times to investigate the murder of Daniel Pearl, the Wall Street Journal reporter that was beheaded by Muslim fanatics. He summarised his findings in a book (Who Killed Daniel Pearl?) in which he minces no words when describing the lawlessness of the Pakistani regime. I vividly recall one sentence from that book (and I'm quoting from memory): "of all the delinquent countries in the world, Pakistan is the most delinquent of all". This was written, mind you, at at time when Pakistan was the US's primary ally in the fight against Al Qaeda in Afghanistan.

BHL embarked on a year-long journey arounnd the US and wrote his observations in American Vertigo. The project was financed by the Atlantic Monthly journal, which asked BHL to follow the footsteps of Alexis De Tocqueville, the French historian who travelled to America in the early 19th century and wrote an analysis of American civic life in the monumental work Democracy in America, considered one of the classic books in political thought. The idea was for BHL to retrace Tocqueville's journey and provide observations about life in America almost 200 years later. (On a side note: why don't I get offers to travel the world for free for a year? I guess my ruminations are not, sadly, as in demand as BHL's...). 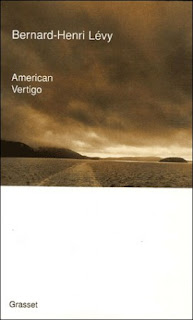 The book turned out to be very different from what I thought it would be like. Instead of a long philosophical treatise about the US, the book is a collection of short vignettes, each 2-3 pages long, about the various encounters BHL had during his journey. Having said that, the last third of the book is a heavy-going "summary" of the journey, more typical to BHL's previous writings.

The journey took place around election time in 2004. BHL covered many walks of American life: politics (he met, among others, Obama, Clinton and Kerry), Hollywood (Sharon Stone, Warren Beatty), prisons (the original aim of Tocqueville was to study the American penitentiary system), entertainment (Vegas, a brothel in Nevada), sports (Baseball Hall of Fame), religion (from born-again evangelists to Brooklyn Jews to Mormons), US history (Mount Rushmore) and much much more. Each vignette describes shortly what he experienced and then expands on the subject by putting it into context. "The big picture" is a motive that runs throughout the book, with BHL trying to frame each experience within the theory he builds for the American experience.

And the theory is as follows: America is indeed an empire, but not of the sort Rome was. Its fierce protection of individualism, coupled with a deep sense of integrity and accountability, make it a power to be reckoned with despite the predictions of its decline. It is a land of contradictions: puritanism coupled with promiscuity, religious fervour coupled with materialism of the lowest kind, isolationism coupled with a sense of global duty. As dysfunctional as America is, BHL believes it will endure. He is an "anti anti-American" and repeatedly berates his compatriots for being so automatically against anything American and for falsely predicting the failure of the American model.

As impartial as BHL tries to be, his love for America is apparent throughout the book (although I think he will refuse to admit "love" is the appropriate word). He writes lovingly about Seattle, calling it the one place he would choose to live in if he were to move to the US, only to trade it later in the book with Savannah, Georgia. All in all, I don't think he was successful in "retracing the footsteps" of Tocqueville, but nevertheless this is still an interesting and stimulating book.

Since I had never heard of BHL, after reading your post, two thoughts struck me. 1) What - can't you get buy French literature on the net ( I tried to find his book but gave up after two minutes)?
2) Impressive, reading in French ! What's next- Homer in classic Greek ? Or perhaps Yoshimoto Mahoko in Japanese ?


But seriously, back to BHL, I got curious so I embarked on some intensive research ( 5 minutes on Wikipedia). He is an interesting character, described as nouveau philosophea, who taught epistemology ( the phylosophical study of knowledge and belief) in university. That all sounds very intellectual, but I guess part of his fame is due to his narcissistic nature. Apparently he liked to dress in designer suits and took am exhorbitant interest in his looks.

Regarding your sidenote ( "why don't I get offers to travel the world for free for a year? I guess my ruminations are not, sadly, as in demand as BHL's...").
Dream on dude. All said and done, you seem to be getting more of you fair share of travelling the world, and why should anyone contract you to write when we get your stuff for free on your blog ?
Not that I am complaining. As far as i am concerned, you ruminations are very much in demand.

True, I get to trvael.

But usually all I get to see is the "magic triangle": airport-hotel room-office. BHL not only got to roam around freely and see whatever he liked, he also got driven everywhere by a private chauffeur (as he does not possess a driver's license).