Having just finished the last book in the Harry Potter series, I felt I had to write a few words about this extraordinary literary phenomenon.

My acquaintance with the Harry Potter books happened by chance. For some reason, I completely missed the success of the first book; I might have read about it somewhere, but I probably wasn't paying much attention. Later on, during one of my visits to Boston, I entered a Borders bookshop in the centre of the city just to have a look. An entire wall was covered with a book I had not heard about; so I picked it up, read the first couple of pages, and decided I liked it. Only after having finished reading it, I found out it was the first book of the series ("Sorcerer's Stone", it was the US edition). It was plastered on the bookshop walls because the second book ("Chamber of Secrets") had just come out. So it is by this coincidence I stumbled upon the magical world created by Ms. Rowling. And, like many before me, I fell under its spell. 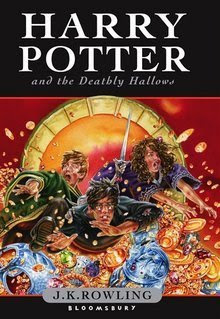 The second and third ("Prisoner of Azkaban") books I bought in Singapore, while on a trip to Asia. The fourth ("Goblet of Fire") and fifth ("Order of the Phoenix") I took off my mother, who bought them in the US. By this time my son was immersed in the books himself and was reading them over and over again. He read the sixth ("Half-Blood Prince") before me and it actually took me months before I got around to reading it. Reason was that I found the fifth book a little too long and not as captivating as the previous ones, so I thought I was beginning to have enough of Harry Potter. After reading the sixth book I realised how wrong I was and was pleased to see Rowling was back in form.

I got the seventh book ("Deathly Hallows") in Scotland a couple of weeks ago. I gave it first to my son to read'; he finished it in 4 days (it is the summer holidays after all), and then I read it (took me a bit longer, I admit). Rowling's finishing stroke is a masterpiece of suspense and storytelling which I very much enjoyed. There were some open questions I had at the end, but I attribute these mostly to my overlooking some facts along the way...

I will not go into any review of the Harry Potter books. Oceans of ink have been poured in literaray criticisms by people far more accomplished than me. One very good review was written by Stephen King, whom I don't like as an author but I think made some very good points about Rowling and the series. But I will make the following observations: