Last week, my wife and I went for a short holiday in Scotland. She was in England the previous week for her studies, and I was scheduled to be in Boston the following week, so stopping for a few days in Scotland fitted in well with our plans.

We stayed in Edinburgh, arriving at our guesthouse there with an hour to spare before shabbat. We picked this guesthouse for its proximity to the synagogue and it turned out to be a lovely place to stay at. The Jewish community in Edinburgh is very small but they have an educated, well-meaning rabbi who does wonders with the his small flock. We had our shabbat meals at his place and the conversation around the table (there were other guests from the US) helped pass this LONG shabbat (ended after 10:30pm!).

We did wander around the centre of the city on shabbat, but actually we saw very little of Edinburgh during our stay. We picked up our rental car on Sunday morning and for three days ventured out of the city into the lovely countryside. All in all, we drove about 1,000 kilometres, through some of the most beautiful scenery we ever saw (bar New Zealand). Here below are the routes we took: 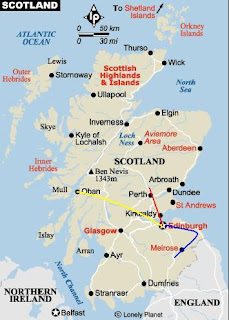 On the first day (yellow) we drove west, all the way to Oban, a small village on the Atlantic Ocean. Our first stop was Stirling Castle, one of the largest and most well-preserved castles in Scotland (there are hundreds if not thousands of castles in this country). Here is the view from one of the ramparts: 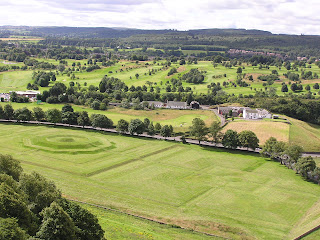 Oban itself is a quaint little village, full with tourists this time of year. We arrived quite late in the day so did not take the ferry out to any of the islands. The walk along the seafront was very nice, especially as it just stopped raining and the sun was coming out. 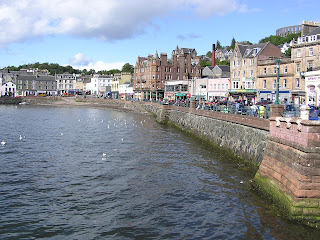 On the way back east towards Edinburgh we saw the most perfect rainbow I have ever seen in my life. It was huge, so big in fact that I couldn't take a picture of it in one frame. 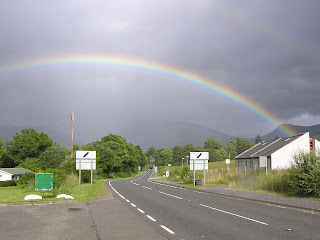 On the second day (red), we started by climbing the hills in Holyrood Park in Edinburgh. These hillsl dominate the city skyline (and helped us navigate back to our hotel on several occasions). The highest point is called Arthur's Seat; legend has it King Arthur was here, but apparently the name is a corruption of some other name. The hill does not look very steep, but the latter part of the climb is quite difficult (if short). It's worth the efforts though, as the 360-degree views of Edinburgh from the top are simply gorgeous, including a view of the old city with Edinburgh Castle perched on top of the hill. 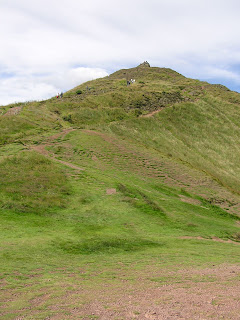 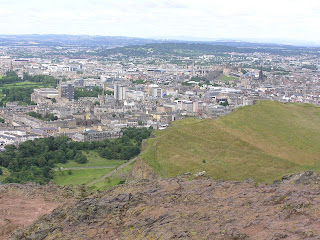 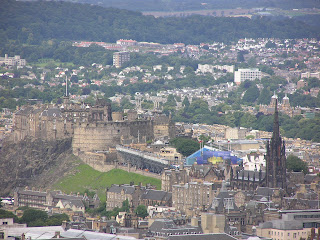 Driving out of Edinburgh we went north this time, all the way past the city of Perth and to a town called Pitlochry. There is a huge dam there with special pools that were built for salmon to make their way past the dam on their journey upstream, the so-called "salmon ladder". The town hosts the Scottish Plant Hunters Garden, a charming green reservoir with winding paths through some truly exotic plants. 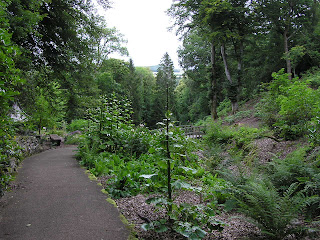 In the evening we searched for a vegetarian restaurant and found an Indian one not far from our hotel - Anna Purna. We went in and I asked the owner whether it was strictly vegetarian. He said "yes". Then I asked whether also the oils used were vegetarin. He looked at me and asked "are you Jewish?". Turns out this specific restaurant has been checked by the local rabbi, "who is also a regular customer" as the owner proudly said with a beaming smile.

On the third day (blue) we drove east to the coast and then down south through what is called the Border Abbeys region. This area of Scotland, just north of the border with England, has - you guessed it - lots of abbeys. We first drove along the coast, stopping in several small towns along the way. In one of them (the name escapes me) I went into a public toilet and was hugely impressed with how clean and well-kept it was. On the way out, I noticed this toilet has indeed been awarded with 5 stars in the "Loo of the Year Awards 2004". Impressive. 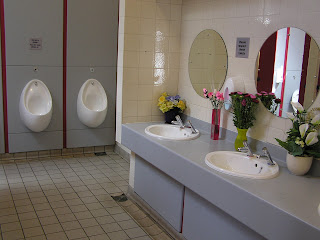 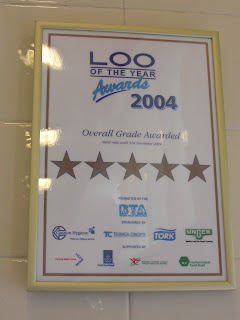 We stopped to see Melrose Abbey, a truly remarkable building founded in the 7th century by Cistercian monks. 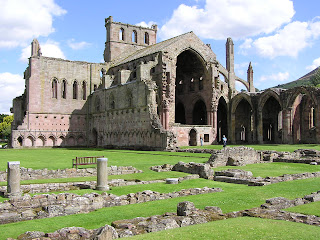 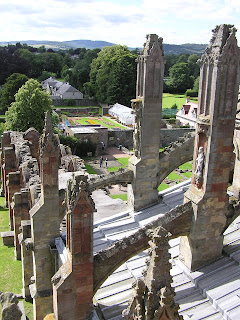 All in all, it was way too short for us to really experience Scotland. But two things made this trip a very pleasurable one. First, the weather was on our side; it rained only for a few hours during our entire stay, and on the third day we could actually walk around without a second layer of clothing! Second, we saw not one Israeli tourist during out entire stay on Scottish soil! Many Spanish, some Chinese, but no Israelis...

Hey. some of my best friends are Israeli tourists.

Loo is slang for toilet.

Thanks for noticing the typo. Corrected.