I'm never going to get around to writing the posts I've been meaning to write in past weeks, so here is a collection of random thoughts about my recent visit to India.

India is a fascinating country. Although I was there only for three days and most of the time I was either travelling or in meetings, my first encounter with this country left me wanting to go back for more. I have avoided India for years, partly because I never travel to third-world countries for holiday. Why suffer when you're on vacation? And business never brought me there until last month.

The first impressions of New Delhi, where I landed late on Sunday evening, were exactly what I expected. Tons of people everywhere; the airport looked like it had been built a century ago; the "deluxe taxi" that was waiting for me was a battered Hyundai Accent; when the driver wanted to switch on the lights while driving, he opened the door and held it open; traffic laws, if any indeed existes, were a mystery to me; and so on and so forth. And the constant horning! Everybody drives with one hand on the horn. 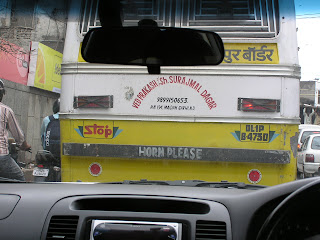 But although I expected New Delhi to be dirty, I was completely unprepared for what I saw. It was as if the city was built in a huge garbage dump, with paths cleared through the garbage to make way for houses and streets. People were sleeping on the streets, inches away from the cars and motorcycles passing by at breakneck pace. Even the plastic tents of the homeless (if that's what they were) looked as if they were erected inside the garbage mountains. Few streets were properly paved; most were simply dirt roads. 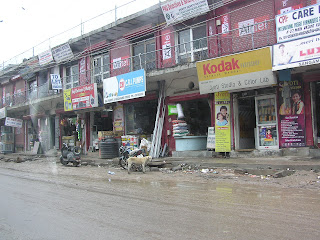 The following day I visited two companies: Oracle and IBM. One was located in the "high tech" area of New Delhi. The contrast between the inside and the outside of the buildings could not have been starker. The streets were the same as the rest around the city: unpaved, muddy from the first monsoon rains with gutters overflowing. Cows were strolling between the hooting cars. But the moment you enter one of the buildings, it's as if you're in Israel or the US, both in terms of the building facilities and the way people dresss and talk. A couple of hours later you leave the bubble and you're once again surrounded by cows, tents, barefoot children and beggars. Astounding.

In the evening we were taken for dinner to a restaurant located in a shopping street that was described to us as being a trendy night spot, situated in the middle of the diplomatic quarter. Frankly, it looked marginally more modern than a commercial centre in a provincial town in Israel in the 1970s... And there was a bull taking a dump in the middle of the pedestrian mall, right in front of the Reebok shop. 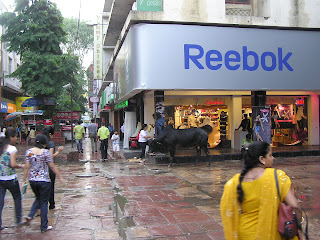 I also visited Bangalore and Chennai. Both cities looked marginally better than New Delhi. The streets looked more modern and I even spotted a couple of green spots that were relatively clean. The "high tech corridor" in Chennai is an impressive stretch of high-rise modern buildings, but once again the street itself was partly paved, with open gutters flowing on both sides. The train stations on the new line servicing this part of town looked like they'd just been bombed. And I saw a bus struggling along at a precarious angle due to a couple dozen of people hanging out of its left side. Just what one expects to see in India , I guess. Strangely, all this "third worldliness" didn't disgust me as much as I feared it would. It all seemed so removed from the world, so much out-of-touch with what the modern world looks like, so unbelievably different - that somehow I found myself detached from it, looking at everything from afar. I am typically very critical of unclean cities, but I don't think I will complain any time soon about Israeli cities being not clean enough. Not after New Delhi.

Hopefully, business will bring me back to India in the future, so that I have an opportunity to start to understand this country a bit better.