Last night I watched the play "In My Name" at the Trafalgar Studios theatre in London. I didn't know what to expect as I bought a last-minute ticket in Leicester Square. I came out after one and a half hours with mixed feelings. 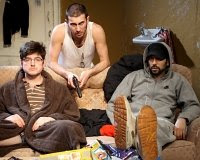 The play is set in a dirty and untidy flat (appropriately referred to as "shit hole" throughout the play), shared by two young and unmarried youngsters in London, on the day of the terrorist attacks on the London Underground and bus - July 7, 2005. Outside, the city is in turmoil, but inside the flat Grim is more concerned with his personal life: his girlfriend left him, he slept with a colleague from work the night before and she also disappeared, his phone doesn't work, there is no hot water, etc. His new flatmate, Egg, only adds to his troubles as he is mostly silent and keeps hearing these voices speaking in Arabic. He condemns Grim from his lifestyle and self-centred approach to life. Then an acquaintance from Grim's workplace, Royal, pops in for an announced visit. The tension between Egg and Royal only add to the general tension in the room. Grim and Royal order an Indian takeaway and the man who delivers the food completes the cast.

The play starts off with a comic note (and tons of foul language) but very quickly this things turn into a nightmare. Egg is actually an ex-soldier who was involved in the rape of an 11-year-old girl when on duty. Images from this event haunt him. He takes the Indian food delivery man as hostage because he suspects he is a terrorist, and forces Grim and Royal to tie him up. He preaches to them about duty to the country and Britishness and constantly points to the Union Jack flag hanging on the wall. He demands them to set a clear line between "us" and "them", especially in light of what is happening outside. He produces a gun and leaves the flat to take care of the landlord, Mohamed, who lives upstairs. Upon his return, he finds out that the prisoner was let free and breaks down. Grim calms him down and Egg's past comes flooding out. The play ends in a tragedy which I won't disclose here.

The acting was superb. The four young actors did an excellent job in a very small theatre (less than 100 seats, arranged in a semi-circle around the "stage"), and I found myself gripped by their emotions throughout the second half of the play. So why mixed feelings? Because of the obvious message of self-blame conveyed by the story. The focus is not on the terrorists, and that's understandable. But the play conveys that general "European attitude", if I may it call it so, of "we are to blame for everything". It is not the terrorists who blew up innocent people on the streets of London who are to blame, but the right-wing fanatic ex-soldier who sees everything in black and white and raped a muslim girl. Perhaps I'm reading too much into the message of this play, but I did come out of the theatre with an uneasy feeling.