A couple of weeks ago, we spent a few days in Ireland. The pretext for this trip was a friend’s wedding in London, so looking at the map Ireland looked like a good choice to spend a few days touring before the wedding, as we’ve never been but heard many good things.

We landed in Dublin around noon on Sunday and took a car. Things started off well when Hertz offered me a relatively small car compared to what I had booked, and ended up giving me an upgrade to a BMW Series 5. Unfortunately, my wife didn’t understand what all the fuss was about (to quote: “a car is a car”) so I had nobody to share the excitement with. 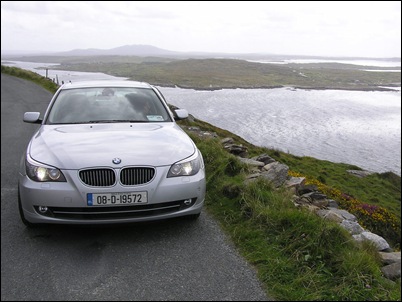 We got on the M4 and drove westwards. As we needed to get to the Galway area for the night, we didn’t stop much on the way. We did make a small detour though, to see Clonmacnoise, an ancient monastic settlement situated pretty much in the heart of the island. It was founded about 1,500 years ago and became a major Christian site until the English destroyed it in the 16th century. 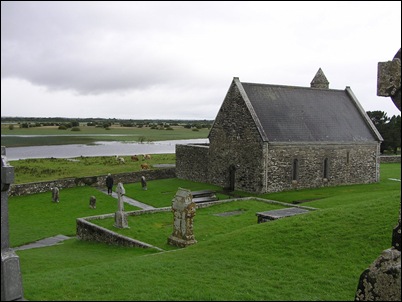 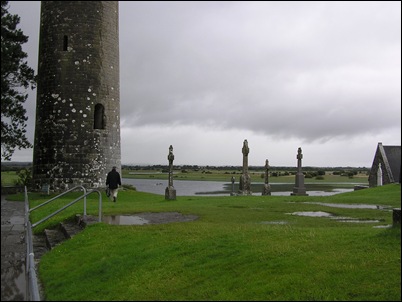 Our stop for the first two nights was the Oranhill Lodge B&B in Oranmore village, just south of Galway. (I link to their website because it’s a beautiful place run by a lovely and welcoming couple – Ann and Michael – so if you’re ever around the area I highly recommend it). We settled in for the night after a short visit to Galway city; it was too cold and too late to walk around much.

On Monday we decided to visit Connemara. We basically drove in a circular route from Galway all the way to Clifden, a lovely town overlooking the Atlantic ocean, and back. The Connemara region is mostly uninhabited (unless you count sheep and cows) and offers stunning views of open and very green landscape (my daughter kept remarking how everything in Ireland was so green). The area is knows for its bogs, which make the roads very bumpy. The Connemara sheep are of a peculiar kind, with black legs and heads. 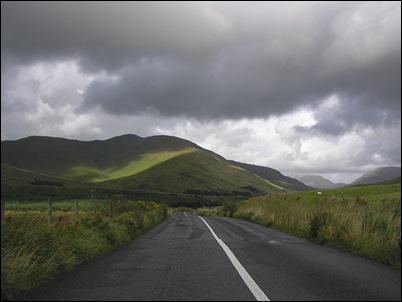 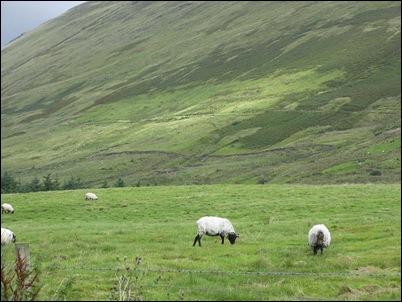 We stopped to have a look at Kylemore Abbey, the oldest Benedictine Abbey in Ireland, which is today a girls boarding school (apparently the school is about to close down). 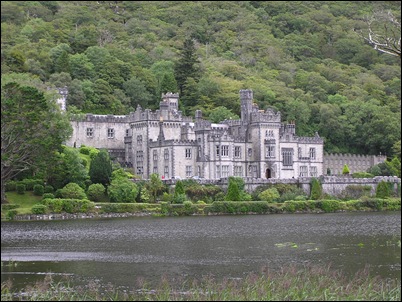 [Side note: I left for Ireland without a book to read (the horror!), so I decided to sample an Irish author. A short search led me to believe that Roddy Doyle would do. I looked for Paddy Clarke Ha Ha Ha in a couple of bookstores but couldn’t find it. In Clifden, the bookstore owner recommended The Snapper, so I bought it. She said it was hilarious; I can’t say it was, although it wasn’t a bad companion for the holiday.]

After a good night’s sleep, we set off on Tuesday to drive southwards to Cork. We made several stops along the way:

- Dunguaire Castle in Kinvara, dated to the 16th century and, in my opinion, the most beautiful castle we saw in Ireland. 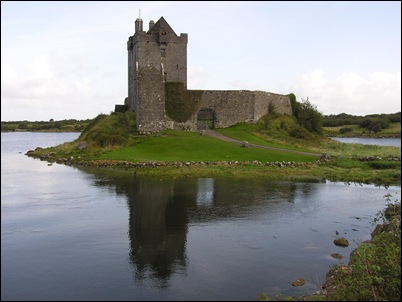 - Poulnabrone Dolmen, an ancient tomb in the Burren region dating back to the Neolithic period. Fortunately for us, we were the only people there so we could wander around the site uninterrupted. 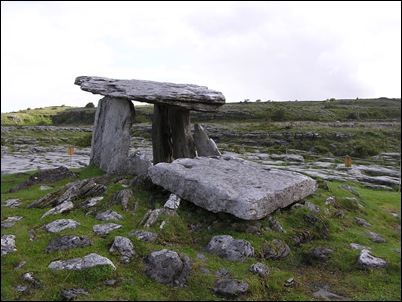 - Cliffs of Moher, undoubtedly the foremost tourist attraction in Ireland. Can’t say I was overly impressed, but I guess that’s what you get when a site is oversold and overhyped…OK, they are pretty impressive. 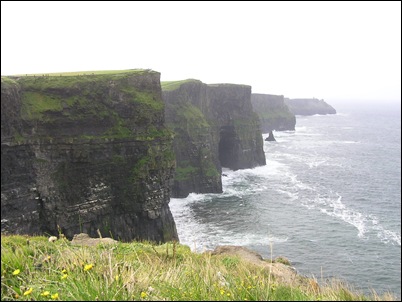 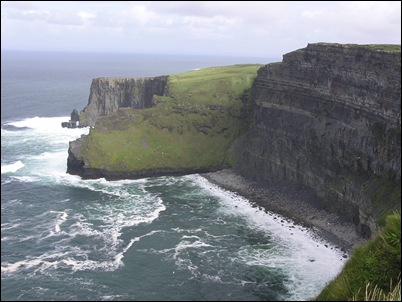 - We bypassed Limerick and stopped at Adare village for a quick lunch. It’s a charming little village with a tranquil public park in its centre. 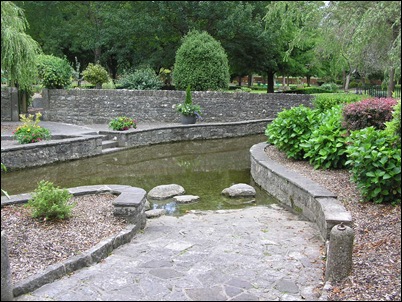 - Our last stop for the day was Killarney, a beautiful town in County Kerry. We had time to walk around the town centre, visit the cathedral and take a short walk through Killarny National Park. This is definitely an area of Ireland worth spending more time visiting. 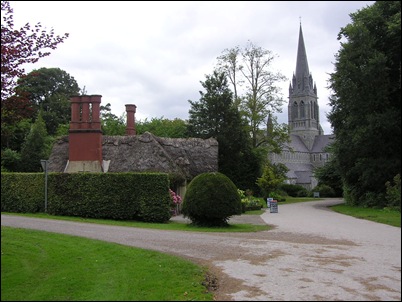 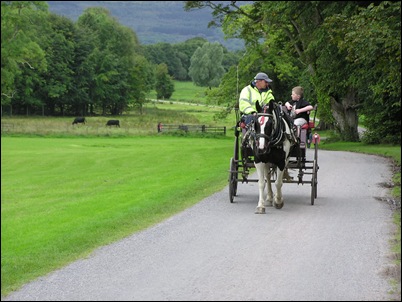 We arrived late in Cork where we had dinner in a fancy vegetarian restaurant (the kids demanded pasta; none of those fancy tofu dishes for them), and went straight to bed.

After a big breakfast on Wednesday morning (the B&B we stayed at is famous for its breakfast; you can order pretty much anything you like from the kitchen and they’ll make it for you), we left Cork on the way back to Dublin.

Because we wanted to have at least a day and a half in the capital, we took the N8 and drove pretty much without stops. The only significant stop we made was at Blarney Castle, where we arrived early to avoid the crowds and get a chance to kiss the Blarney stone (only I did; the rest of the family refused to be lowered down). 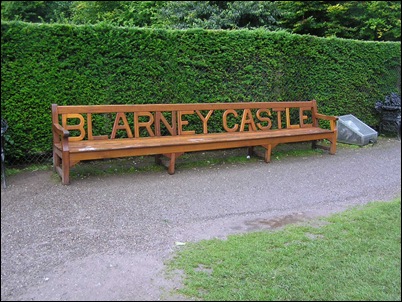 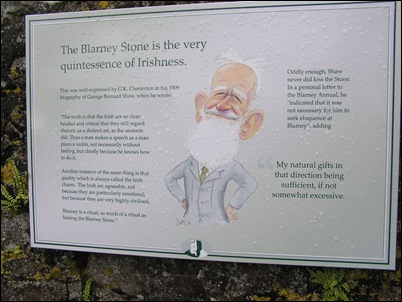 After checking in at the hotel in Dublin and returning the car (with a sigh), we headed for the first place any sane person would make sure he visits first in Dublin, just in case the world comes to a sudden end before the end of the visit: The Guinness Storehouse! Home of the famous dry stout beer (the “coal beer” as my wife likes to call it). I don’t drink much beer, but when I do, I prefer Guinness; a friend once asked me why I like to “chew my beer”... Anyway, Guinness Storehouse is apparently the most visited site in Dublin where the visitors self-guide themselves through the seven floors of the building. The visit culminates in a “free” pint at the Gravity Bar on the top floor. 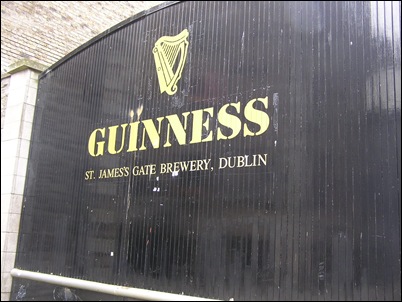 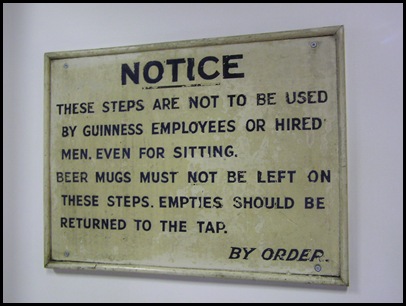 We then strolled through the center of Dublin, through the medieval quarter and Grafton Street, then back to the hotel.

On Thursday we continued to explore Dublin on foot. We crossed the Liffey to the north side of the river, walking along the quay and up O’Connell Street to see the Old Post Office building and the Spire of Dublin. 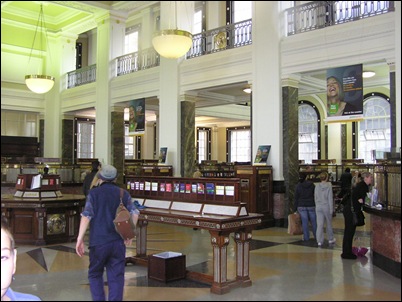 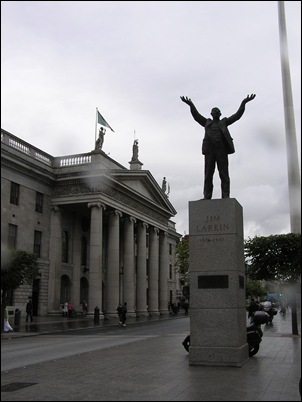 We then crossed back to see the Temple Bar area, the City Hall, Dublin Castle and the impressive Chester Beatty Library. We had lunch neat St. Stephen’s Green and then walked through the government buildings area. We concluded our Dublin visit with a stroll through Trinity College and a visit to the Long Room Library. Now, this is what I call a university campus… 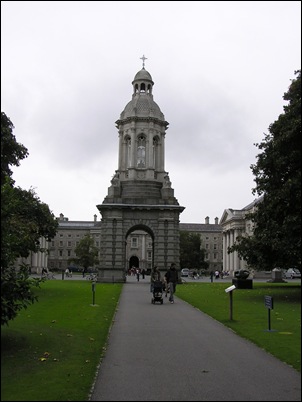 Ireland deserves more than a few days’ visit. I hope to be back there soon. The Irish all seemed very friendly and, surprisingly, I could understand what they were saying (mostly). Perhaps they had mercy on the bumbling tourist and toned down their accent, who knows?

A word about the weather. The joke is that if you don’t like the weather in Ireland, wait five minutes and it’ll change. This is very much true, but nevertheless, these Irish have a very funny notion of what summer should feel like. We saw this funny t-shirt at the airport on the way out: it had four sheep (spring, summer, autumn, winter) all holding umbrellas in the rain, with the only difference being the summer sheep had sunglasses and the winter one had earmuffs.

This is a beautiful account. The pictures are lovely. Thank you for sharing!!

I found you post fascinating. Recently I was a few days with the kids in Ireland too, and even had about 2 sunny days ! We stayed higher up north (Donegal), where is green and wild, with bog-land and as many lakes as fields. There were more pubs than seems possible per populus. The Irish are laid back and friendly. My kids loved how complete strangers lift their fingers to say "cheers" when passing. I found Guinness foul but it must be an acquired taste.
My kids loved the rain, and the long days, the wild greenness and the turf fires. They didn't like the long winding lanes ( were travel sick half the time) and their mum negotiating how to overtake the tractors on the wrong side of the road.

If you plan to travel in Galway City you should know some valuable information's. After long searching I found this online that, The Herons Rest B&B is located right in the heart of Galway city. This Galway Bed & Breakfast is a waterfront haven offering award winning accommodation and best breakfast 2009.
Bed and Breakfast Galway