An Instance of the Fingerpost, by Iain Pears

Reading a book recommended by a friend is almost always guaranteed to be a pleasant experience. And so was this one. I had never heard of Iain Pears until a couple of weeks ago, when a colleague of mine from work mentioned him over dinner. He described how moved he was by Pears' writing, so I decided to give it a try. On the way back from the restaurant we stopped at the wonderful Barnes & Noble store in Burlington, MA, and I picked up a copy of An Instance of the Fingerpost. (Yes, I know, the title made zero sense to me at the time as well.) 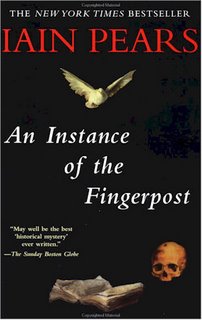 The book is a murder mystery novel. It is set in 17th century England and recalls events that happened in Oxford shortly after the Restoration of Charles II to the monarchy in 1660. The events are told in the form of four memoirs, two of which are by real historic characters (John Wallis, mathematician and cryptographer and Anthony Wood, historian and antiquary). The book is laced with historic events and people, and Mr. Pears kindly provides an index at the end of the book to help the reader distinguish between real and fictitious characters and give a short biography of the real ones.

Dr. Grove, a dean at Oxford university, is found dead in his chambers after being poisoned by arsenic. Signs point to Sarah Blundy, a servant girl who used to work for Dr. Grove. Sarah is found guilty and is hanged in public. But obviously this is only the beginning of the true story and as the plot unfolds, events much greater than a simple poisoning are revealed, some truly shocking. The ending is quite surprising, always a good thing with a mystery novel.

The author provides a fascinating look into life in academic Oxford in the age of the great scientific, medical and mathematical discoveries. Characters in the novel include such luminaries as the philosopher John Locke and the chemist Robert Boyle. It is laced with discussions on philosophy, theology, medicine and mathematics, such discussions taking place between the "men of curiosity" of that epoch. It is enlightening to witness how much religion played part both in politics and in science in those days, permeating all walks of life and defining the relationships between Protestants, Catholics and Quakers.

Pears writes beautifully with many insights into human nature and desires. The following passage struck me as particularly powerful, describing Anthony Wood's thoughts when faced with the insurmountable task of going through all the manuscripts in the libraries of Oxford to do his work. I am often struck with the same thought when I realize the number of books I will never get around to reading in my lifetime:

It is cruel that we are granted the desire to know, but denied the time to do so properly. We all die frustrated; it is the greatest lesson we have to learn.

This book has been compared to The Name of the Rose by Umberto Eco. That's a fair comparison but I find Pears' writing to be more flowing and more "human", indeed more moving, than Eco's.