Following up on a previous post, consider if you will these two pictures: 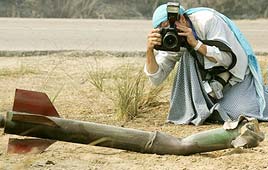 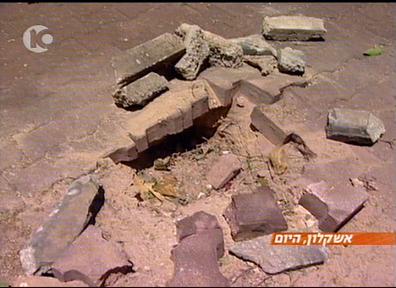 The first picture is of a kassam rocket that landed some time ago in the Negev. The second is of the kassam rocket that landed in a school yard in Ashkelon a couple of days ago. Look closely. In the first picture, you see that the rocket does not explode (as is usually the case); it merely hits the ground and bends. In the second picture you see the damage caused by the rocket: a couple of Ackerstein blocks are broken.

My point is: these "rockets" are pretty harmless unless they fall directly on your head. Can they cause injury? Yes. Can they cause fatalities? Of course. But the likelihood of either is small, as the statistics clearly show. However, listening to the accounts in the media and to the dramatic scenarios by the politicians, one is led to believe that kassams are a little short of mini nuclear devices.

So am I saying that there are no problems with the kassams? No, I'm not. Yes, Israeli cities living under the threat of daily bombardments is an unacceptable situation (and I support the military actions taken in Gaza). Yes, the citizens of Sderot, Ashkelon and other southern cities have all the right in the world to demand that the government solve the problem. And yes, under the same circumstances I would most likely react the same way.

But a little proportion is in order. Panicking in face of these flying tubes may be a natural reaction, but it also sends a clear message of how easy it is for two-bit terrorists to terrorise the Israeli population. Perhaps some history lessons about the behaviour of London's citizens during WW2 is in order.

I totally agree with you. I travel frequently to kassam-range areas and I am not afraid, not due to denial but due to logical reasoning of the risks. It is important to inform people that a kassam is not a ketyusha. As you say, the essence of terrorism is to instill fear in any way that works. We should avoid augmenting the effect with dramatic hysterical descriptions.

hey where do you live?
I got me a flying tube for you. Its mostly harmless.