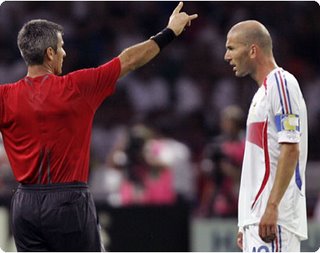 The Talmud says that there are people who "buy their entrance ticket" to the afterworld in "one hour", meaning that one good deed can turn around a person's destiny. Tonight, in the world cup final, one of the greatest players of all times, Zinadine Zidane, demonstrated that it is possible to do just the opposite.

In one moment of anger Zidane brought his football career to a shameful end, butting his head against an Italian player and getting sent off. Instead of being remembered for his wonderful, long career, he will be remembered as the team captain who could not control his temper minutes from the end of the world cup.

And justice was done. Italy won!