This is a tragic day in the war for Israel: at least eight soldiers dead and many more wounded from the fighting around Bint Jbeil in southern Lebanon. This war is taking a (predictable) turn for the (expected) worse. As Meron Benvenisti writes today in Haaretz, "very soon everything will return to what it was before - apart from those who sacrificed their lives".

Yesterday I received an email from my MBA alumni network in Israel. They were organizing to deliver urgent aid to new immigrants from Ethiopia who live in the north, most of them in absorption centres, and were in dire need of supplies as they were spending most of their time in the shelters. People were asked to bring in food, water, toys, fans, linen, diapers, computers, TVs, etc. and volunteers were required in order to drive up north today to distribute the stuff around the various centres.

At 10am this morning we gathered at Tel Aviv university. In less than 24 hours, the amount of stuff that was brought in was quite astounding; it filled up an entire room and more was arriving throughout the morning. We loaded several cars and jeeps and every driver was given an address and a phone number. I was assigned to drive to Tveria (Tiberias) to an absorption centre, pictured below, where more than 300 people live, half of whom are children. 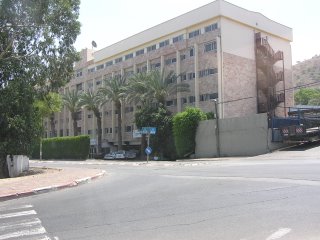 Thanks to route 6, I was in Tiberias in less than 2 hours and was warmly welcomed by the management of the centre. They, and some cute kids living at the centre, helped me unload everything and then were kind to offer a cold drink and some fruit. I took a list of additional things they needed, as there is a second delivery round planned for early next week. They thanked me warmly several times, but frankly I felt it was I that should be thanking them for giving me the opportunity to help, even if it was nothing more than a delivery job.

(On the way back home, I stopped at Rabbi Meir Baal HaNes's grave to pray Mincha and then, since I had time, drove through Bet Shean and decided to stop and see the archaelogical digs there. But that's a subject for another post.)